You may have noticed that we are only ever shown photos of Bigfoot, and not his wife. One can only suppose this is because she is wearing camouflage, thus making her nearly invisible in the Northwest woods. At our winery, you know we have always bordered our Duckleberry Grunt label in camo, so we made the jump that this should be her label. And what kind of career might you expect from someone who boasts big feet? Well, we think that creature would most likely be a winemaker, able to stomp more fruit than most.

At the same time we are designing a Sasquatch Habitat Garden in the farthest reaches of the 15-acre display garden. Since this area is planted with huckleberries, and these are likely primary forage of Sasquatch, it made sense that the wine made by the Bigfoot family would be Duckleberry Grunt (originally a blend of huckleberries and Gewurztraminer but now with blueberries). So we created this silly label with Mrs. Bigfoot stomping in a “duckle” barrel while wearing her camo bikini exposing the telltale Bigfoot tattoo on her derriere.

We will not be surprised to have Bigfoot sightings in the near future up on Bigfoot’s Huckleberry Hill. To assist in this search for the elusive creature the winery carries numerous Bigfoot products in their gift shops including a Bigfoot Adoption Kit, a Sasquatch Field Guide, and The Boy Who Cried Bigfoot. We also have a few one-time-only quarts of Duckleberry Grunt sorbet from Olympic Mountain Ice Cream in the grab and go freezer in our gift shop while supply lasts.

Westport Winery Garden Resort’s burgeoning Sasquatch Habitat can be found at 1 South Arbor Road, halfway between Aberdeen and Westport, Washington. Their Seaside, Oregon tasting room and gift shop is at 810 Broadway. For more information call the resort at 360-648-2224. 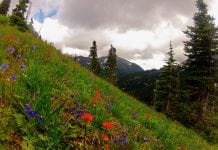 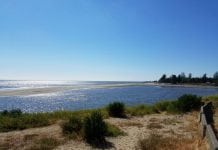 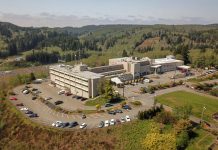