Ocean Shores Public Library (OSPL) has become a central community meeting place for residents and visitors alike. Over the years, its resources and services have been stretched by the demands of population and readership growth. Beyond lending books and media, OSPL supplies information on local assets, hosts events and offers public computers all the while adjusting to the needs of modern library evolution despite its diminutive size.

OSPL first opened in 1972 and moved to its current location in 1993. The year 2019 brought the only remodel and expansion in its history.

The patron public was warned of the library closing on July 3 and would remain closed to an undermined end date near the middle or end of September.

The entire project was funded by generous gifts and money from private citizens through the Ocean Shores Library Foundation and the Friends of the Library, assuring that no tax money was solicited.

For readers, book lovers and passionate patrons, the long drought to library access neared an end with email and public proclamation: “Celebrate our expansion and remodel. Join us for the ribbon cutting and refreshments on Tuesday, October 1, 2019 at 11:00.”

People started gathering in the library’s front parking lot in anticipation of the event. The weather was perfect with blue skies and a warm sun for such an outside wait.

Right on time, staff members presented behind a stretched red ribbon with Library Director Keitha Owen, huge ceremonial scissors in hand. She then invited anyone interested to pose for a historic community picture.

That done and after a brief statement to a now larger crowd, Owen passed the cutters to Denise Siers, president of the Ocean Shores Library Foundation and Friends of the Library, who snipped the ribbon to the crowd’s applause. She then directed that the front door be opened.

A line formed at the newly installed automatic front door. Folks calmly entered the building guided by staff and volunteers handing out new “Opening Day” brochures with suggestions to either head into the main library or the adjacent meeting room more formalities and cake. The meeting room filled then flowed out into the foyer. The second phase of the opening took place here where Owen introduced people who made helped make the remodel happen, library activists and city officials.

For construction purposes, the Friends of the Library had taken ownership temporarily for the duration of the remodel. The event also featured ownership of the library signed back over to the City of Ocean Shores.

With all official business completed and cake distributed, the main library swelled with citizens awed by what had been created for their benefit.

What is striking when entering the library is the amount of light and newly developed space of the makeover. Besides the enlarged 50-capacity meeting room, a new smaller meeting room/quiet study area offers more options for scheduling. Fresh paint, new flooring and added furniture revitalizes the 26-year old interior with tan, bone and brown accents glowing under the natural light from the large windows of the newly built areas that merged the teen reading section and a bistro-style table.

A 47 percent increase in shelving allows space for another 2,500 items in all collections. And there’s the energy-efficient LED lights enhancing reading while saving money, and further ADA accessibility features inside and outside as well.

After the crowd spent time touring the library, clustering in groups for discussion and lending their congratulations to staff, the tide began withdrawing. Soon the opening day activities settled into work-as-usual until closing hour.

“What I really want the public to know is that we are the community’s library. We are many things to that community,” she said when questioned on her feelings about the Grand Opening. “We are a welcoming place where people can meet and greet friends.”

“We had a door count of 500 people! That’s around 70 an hour. It was very gratifying and not one negative comment the whole day!” she added joyfully.

She commented on the good work of the staff and volunteers in bring the whole project to such a successful conclusion.

The OSPL website can be visited for the library’s business hours, its many offerings, up and coming events, and more, including construction related photos. 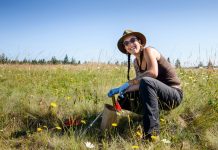 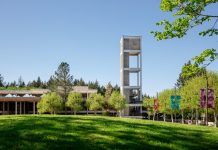 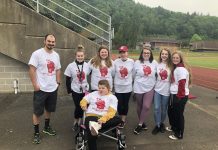