When a talented team can work the kinks out, championships usually follow.

Although it was an unusually pedestrian regular season for the Elma High School fast pitch team, the Eagles peaked at the right time and can now call themselves 1A State Champions.

Elma defeated Mt. Baker 6-1 on Saturday May 31 in Richland to bring home the state crown, capping off a dominant state tournament performance that saw the Eagles outscore their opponents 34-6 in the four game series.

Just 16 days prior to the state championship victory, the Eagles did not appear to resemble a champion as they dropped 3 of 4 games heading into the district tournament.  Even with the struggles, head coach Janene Todd and her husband Mitchell, an assistant coach, kept relaying the same message to the team.

“The whole season Mitchell and I said we need to make sure we come together at the right time,” said Janene Todd, who is in her twelfth year coaching and fourth year with the Eagles. “We just kept saying that it would eventually happen.   Sure enough, it did work and we made it happen.”

After taking second at the District IV 1A State Tournament, where they fell to league foe Montesano in the championship, Elma bulldozed their way into the state semifinals by posting dominating 8-0 and 14-0 victories over Zillah and Seattle Christian respectively in the opening two rounds.  The Eagles ability to dispatch their opponents with relative ease in the tournament may have come from their experience playing in the highly competitive Evergreen League, which sent two other teams (Hoquiam and Montesano) to Richland.

“Our league is always the toughest and if you get out of district, you will do well at state,” said Todd.  “This year, we were fortunate not to meet Hoquiam or Montesano (in the state tournament) and played some opponents that didn’t know us.  We felt like we would have an advantage in those games.”

Waiting in the semis was three time defending state champion Connell High School, providing the Eagles with the ultimate test of their resolve and talent.

Down three runs in the seventh inning, second team all-league junior infielder Izzy Cristelli tied the game up with a two-run homer.  An inning later, Evergreen League Co-MVP Brooke Goldsmith hit a walk-off triple to give Elma a 6-5 victory.  Seeing her team come back against a high caliber opponent in a pressure-filled environment was an unforgettable experience for Todd.

“That was the championship game for us.  We’re facing the three time state champs and we start out behind.  The girls didn’t give up and the heart they showed was amazing,” said Todd, who will be stepping down from her coaching position along with her husband. “It was every single girl that stepped up.  I think batting average wise, everyone was hitting at least .500, and there were so many timely hits.”

The trio of Goldsmith, Cristelli and first team all-league infielder Sydney Smythe were driving forces for the Eagles all season.  However, the extra push by Goldsmith, particularly in the state tournament, was the deciding factor for Elma.

“She had 42 strikeouts in the tournament and that’s more than she had all season,” said Todd, who cited Goldsmith as a major reason why she and Mitchell decided to coach this season. “She gets this look on her face and once you see that, there is no stopping her.  She pitched a two-hitter in the state final, and that was the culmination of her hard work.  She had that mindset that she wanted to go out on top.”

After the Eagles championship win, a major celebration began within the Elma community.

Upon their return to Elma on Sunday, June 1, the team rode fire trucks through the town en route to the high school gymnasium.  They were greeted by their classmates, friends and members of the community.  Though they had a strong contingent in the Tri-Cities for the tournament, Todd was happy that her team could celebrate the victory with the entire town the day after. 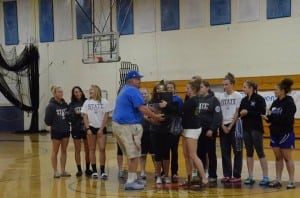 “That was special because we won so far way on the eastside of the state,” said Todd. “The girls wanted to be able to celebrate with everyone, so having that opportunity to be treated like that was very special.”

Now with her coaching career over (for the time being), Todd has had time to reflect on the recent championship run.  The process that led to the victory over Mt. Baker began many years ago, making it that much sweeter for Todd and the players.

“These girls have been playing together since they were ten years old, so there is that trust were each girl has the others back,” said Todd.  “This year was our chance to make good on the past few years (the Eagles went 3-3 in the 2013 state tournament) and we talked about taking it one game at a time.  Once the girls got that mentality, we started to make progress.”

“We’re so excited this happened to us,” Todd continued.  “It’s so surreal.  You talk about wanting to get the state title, and once you do it, you don’t know what to think.”