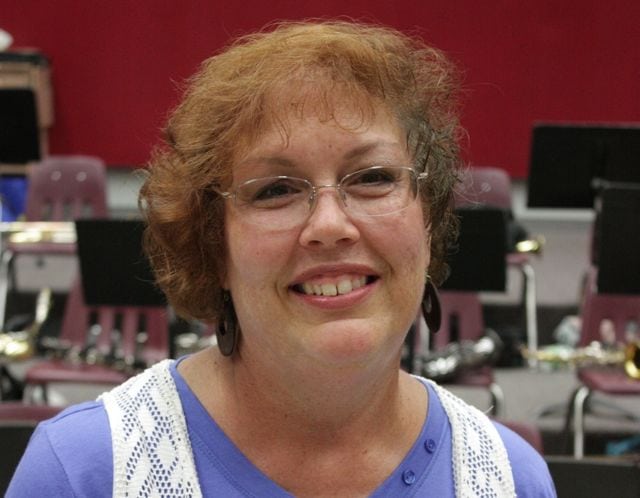 Band members at Hoquiam High School are spending a grueling week of eight to twelve hour days in band camp this year. Drills, marching, percussion, and team building have been their focus. For returning students, the annual camp this time around is different because they’re moving ahead with a new band director.

A new wind has blown in, and not unlike the one that carried Mary Poppins, this breeze has brought change, excitement, and the color of Susan Peters.

Peters has been teaching choir and band classes for about 23 years. Her free spirit took her to Shanghai, China last year until a facial injury put her out of comission for over five months.

With the opportunity to travel just about anywhere, Peters decided she wanted to search out a community to settle down in and retire. During a six hour interview with Hoquiam High School, she decided Grays Harbor was just the place.  “It was the most grueling interview I’ve ever been a part of,” said Peters, who had the opportunity to direct the bands and kids during her interview. “But the more I got into it, it just warmed my heart. The principal was so enthusiastic about the program and knew so much about the kids.”

The community focus of the program was a huge draw for Peters, who hopes to continue that tradition. So long as the school permits, Peters plans on sticking around through retirement. And what a benefit to Hoquiam! Robin Cozad, Hoquiam senior, was present for Peters’ interview. Though capable of playing fourteen musical instruments, he feels there is much to learn from Peters and thinks she will be bringing a great deal of enthusiasm to the table.

Peters doesn’t just teach the notes and the melodies, she lives them. A jazz pianist, Peters isn’t limited to the ivory keys. She can find her way around most instruments, though she says she isn’t all that great at playing brass. “It’s a goal of mine that music teaches life lessons, not just music. And ultimately, I want to have a good time! I didn’t get to teach much last year because I was healing from my injury. I just want to get back into teaching and doing my musical thing with the kids…I missed that,” expressed Peters.

The kids themselves, though greatly missing Mr. White, are excited about what the upcoming year will hold. Between a new teacher and an introduction to marching band competitions, the autumn months will be full of positive challenges.

Sarah Dier, Hoquiam senior, says she is excited to have new things to aim for during her senior year. Dylan Belcher, also a senior, feels like Peters has “big expectations” for her class this year – expectations she feels the band is prepared to meet with some diligence and hard work.

One of the first goals of the 2014 Hoquiam band class, will be the Veteran’s Day Concert at the 7th Street Theatre on November 11. The band and choir will both be performing at 2:00 p.m. and 7:00 p.m. showings.

Under the care of Mr. White, the Hoquiam band maintained a community oriented focus. Peters is excited to carry on the tradition with performances like the Veteran’s Day Concert. It shouldn’t be too difficult as Peters was thrilled to discover that most of her band members are already involved in their community and careful to watch out for one another. “They really are good citizens and good people. They’ve been flexible and open to change…so talented and smart,” said Peters, who has enjoyed getting to know her new students during band camp.

The motto for her class this year is “good vibes” – vibes she hopes are developed in and out of the classroom as she finds her place in Hoquiam High School and also in her new community.

Hoquiam High School Principal, Brock Maxfield, is excited for the new year. “Susan brings a wealth of experience, enthusiasm and perfection to our band program. We are excited and fortunate to hire somebody as well respected in the music community as she is,” stated Maxfield. Lucky for them, Peters feels fortunate to be there as well. The mutual caring and respect between Peters, Maxfield, and the students is sure to produce outstanding results.