Stephan Severson’s life has been severely impacted by an autism spectrum neuro-developmental disorder since early childhood. He has difficulty socializing and acting age-appropriately and it is hard for him to focus his attention on important subjects. On the other hand, he is able to concentrate deeply in areas that hold his interest. One of them is chess.

Stephan is the oldest of the five children of Hoquiam High School teacher Stan Severson and his wife Connie. Stephan’s brothers Alex, 22, and Zach, 18, have already left home. Stephan lives semi-independently next door to the home of his parents and his younger siblings – his 14-year-old brother Jake and his 10-year-old sister Taylor. The family owns a large woodland lot north of Hoquiam with lots of space for dogs, chickens, geese, and a Silver Streak Trailer, which is Stephan’s home.

His parents are supporting Stephan in slowly building an independent adult life while providing the help his disabilities require. He lives by himself in the trailer with all the freedom the country setting allows. However, he has a structured schedule including doing his own laundry in the family house. Most days he comes over for meals with the family, but sometimes he grabs a hamburger in town.

Stephan’s weekly schedule includes taking the bus to town for a work out at the YMCA in Hoquiam and for his current volunteer job at the St. Mary Feed the Hungry Program in Aberdeen. He has held other volunteer positions in the past, at the Aberdeen Salvation Army and at Habitat For Humanity where he worked as truck driver assistant. He talks enthusiastically about some fun donation items he helped load into the truck: “There was a large flat-screen TV and a house full of John Wayne items. One John Wayne painting was worth $10,000.”

Stan and Connie noticed that Stephan had problems with social interaction and focusing when he was about two-years-old. He was in pre-school when Stan, who enjoys chess, began to teach the boy the way the figures moved. He caught on quickly and was able to focus his attention on the game.

Stephan played his first chess match with someone outside of his family in fifth grade. By the time he started middle school, he could beat his dad on a regular basis. “I had to buy chess books,” Stan remembers. It was at Hoquiam Middle School, that Stephan had opportunity to shine. Teacher Paul Zurybida, a regional chess player, organized tournaments at Hoquiam High School. When he discovered Stephan’s interest in the game, he encouraged the boy.

Stephan remembers how he played Mr. Zurybida: “He was very good. He was a bishop player. I’m not good with the bishop. I’m a knight player.” Stephan received an invitation to a match at Hoquiam High School. He participated in tournaments where he played against students from Western Washington. “Mr. Zurybida brought in people from all over as a challenge. There was even a guy from Alaska!”

Stephan proudly brings out the trophies marking his achievements. In 2008, he won a close second place in the Washington Coast Chess Championship. “I was very close to winning,” he says. “Then I slipped up with one wrong move and came in second place.”

In 2010, he won first place at a Hoquiam High School tournament. “That time, the other guy slipped up,” he smiles. His chess successes have given Stephan’s self-confidence a great boost.

The strategy of chess draws Stephan’s attention. “I can really get into it,” he says. The same happens when he plays his electronic race car game Mario Kart 8, which he plays wearing his special Mario gaming hat. He occasionally trades games with the guys at Game Freaks in Aberdeen.

Apart from stretching his brain, Stephan also likes to stretch his muscles. Besides his chess trophies, he has been awarded two cross country trophies. His YMCA athletic spinning class, an indoor cycling class led by an instructor who determines variations in speed, resistance, and body position, is another game Stephan can really get into.

Stephan’s school career was difficult because of his disabilities, but the Hoquiam School District did everything possible to help him. He was aided by a one-on-one paraeducator who made sure he would not be overwhelmed. Taking one extra year, Stephan was able to graduate from Hoquiam High School with accommodation.

At his point in his life, Stephan is still dependent on his family. His social challenges make it difficult for him to hold a job. However, Stan explains: “Symptoms like Stephan’s tend to lessen as the person matures. We will work on finding him paid employment in the future and we hope that at some point he will be able to live an independent life.”

Stephan himself is optimistic: “The old me had problems,” he says. “The new me can do it.” 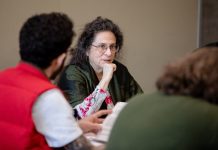