If you live anywhere near the Harbor it’s only slightly possible that you’ve not heard of nor seen Wil Russoul. He seems to be almost divine in his omnipresence and those who’ve heard this “music missionary” speak, know his enthusiasm for the arts is evangelistic in nature. His goal? Orchestrate an arts community in harmony with local business. “I totally believe we can use art and music to build revenue and enhance social behaviors,” says Wil. “Art and music has to be a part. Every mayor’s

dream involves [that]. Creativity allows us to grow.”

Wil Russoul, the writer-composer of the song Aberdeen, makes music and he makes music happen. In addition to managing Stone Soup Artists—for which he takes no salary or commission—and heading the non-profit Play it Forward, Wil also plays around the Harbor with various artists including his band Outta Monte, works a full-time day job and remains active in “community”—no matter which community it is.

It seems he’s on a local talk show every other week and is always on social media supporting other musicians, a local cause or singing his heart out in a music video. All this while he’s ardently pursuing “The Alley”—his impassioned vision for a vibrant, musical downtown Aberdeen.

To sit down and chat with Wil is like going to a Tony Robbins seminar. You walk away pumped about doing something for your fellow man, getting involved in your community and cranking up your iPod or playing your guitar.

It’s quite possible that his infectious zeal is in part due to being born to missionary parents in Puerto Rico. Or, maybe it results from having been mostly deaf until he was fifteen years of age and then, having his world suddenly opened to hearing and music. Or, perhaps it’s the result of rebounding from a broken back after being assaulted. No matter the origin, he’s an inspirational firecracker.

With a background in social work serving tribal peoples, Homeland Security and the Washington State Guard, the singer-songwriter-musician currently works non-musically for Washington State with the Workforce Training Board approving educational institutions for funding through the G.I. Bill. He’s also on call with FEMA, a social activist, a supporter of community development and a personal encourager.

The concept of Stone Soup comes from an old folk story in which hungry strangers convince stingy townspeople to each share a small amount of their food in order to make a meal that everyone enjoys. The strangers begin by boiling a stone in a kettle of water and then, sampling the “soup,” convince the town folk that this or that would be just the thing to make the broth better.

Stone Soup doesn’t barrel into establishments and take over, nor do they manage bookings for a venue. They simply offer artists who want to perform—many of them new musicians wanting for nothing more than an opportunity. It’s more about bringing instrumentalists, singers, songwriters and even roadies together to serve the community, he explains.

Wil even brings music to the streets and can often be seen parading around with guitar in hand encouraging whomever he comes across with an impromptu song.

Kristi Daniels (recently engaged to Wil), who wears several community hats as well and works at Grays Harbor College, helps Wil run the non-profit Play it Forward. The organization is primarily about funding music and arts scholarships, but they also repair and give away musical instruments. It’s all designed to invest in musicians and to help the local music arts scene.

“Working with Grays Harbor College, we try to benefit students like foster kids,” says Wil, noting that many Stone Soup artists, along with the Grays Harbor community, are those that help make it happen..” It’s just one way that Wil gives back to the Harbor community, but he’s composing another plan called The Alley.

“When I first came here in the mid-90s, everyone said there was nothing to do. So, I took a look at what I could do,” says Wil. Since then he’s been building momentum toward what he calls The Alley. He, along with a handful of other parties, is trying to create a thriving two block-wide music district for all ages that stretches from the D and R Theater to The Morck building in downtown Aberdeen.

The effort will involve business owners, Jason Hoseney and others from Grays Harbor College and, of course, local talent. In fact, projections based on studies and examples from other cities suggest such a music mecca will attract other artists and audiences from outside the area. Wil is the primary force behind the project and his passion is far-reaching. On March 30, Wil spoke to representatives from seventy municipalities about what’s happening on the Aberdeen music scene.

Wil Russoul is so driven by and involved in his dreams that he sometimes envisions quitting his day job. “If I can do [all] this at the end of every exhausted hour, I wonder what I could do if I gave myself to it.”

Today, The Alley is already taking shape. Just check out a First Friday downtown and you’ll see—and hear—the beat of Wil’s heart for a rockin’ Harbor. Because when it comes to rustling up some music, where there’s a Wil, there’s a way.

To get an idea of what Wil sees, watch his music video Aberdeen highlighting the people and places mentioned this article. 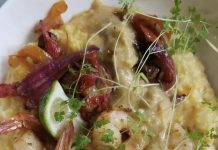