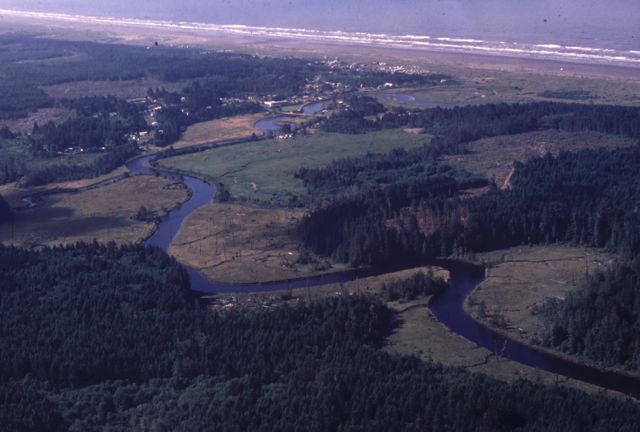 The town of Copalis sits quietly along the coast, having seen better days during the logging and fishing industry heydays. Unassuming and small, Copalis doesn’t look like the type of place where amazing scientific discoveries should occur. However, looks can be deceiving.

Less than a mile upriver from the bridge crossing the Copalis River on Highway 109, a forest of dead trees, known by locals as the Ghost Forest, helped not only solve the mystery of the Japanese tsunami of 1700 but also has given us insight about tsunamis right here at home. The Ghost Forest of Copalis isn’t just someplace that scientists study, it is a location that we can all access, and a unique destination for visitors from around the world.

On the evening of January 26, 1700, a magnitude 9.0 earthquake rocked the Washington coast off Grays Harbor, causing the land to instantly drop in elevation by up to 6 feet around the region. The quake occurred on the Cascadia Fault, which stretches from North Vancouver Island all the way to Northern California and saw over 622 miles of land get moved by an average slip of nearly 70 feet. The 1700 earthquake on the Cascadia Fault, located off shore and under the Pacific Ocean, caused a tsunami that not only devastated the local areas but killed over 15,000 people across the ocean in Japan.

Nothing was known about the tsunami’s origins until Brian Atwater published the paper “The Orphan Tsunami of 1700”. This paper helped describe and prove that what occurred in late January 1700 in Japan was directly related to the Ghost Forest in Copalis, making it the epicenter and focus of the disaster.

Last decade, former Grays Harbor County Commissioner Al Carter had the chance to meet and talk with Brian Atwater in the Ghost Forest of Copalis, along with members of the North Beach Citizens Improvement Association. Launching canoes at Johnson’s Mercantile, the group paddled up river a little over a half mile to a field full of gray snags and dead tress.

“The Ghost Forest is an unusual land formation that was part of an important geological event,” explained Carter. “I went there to see what it looked like and understand what happened. Plus it is a great kayak experience on the coast.”

As the group got out of their boats and toured the Ghost Forest, Atwater dug down into the ground, exposing layers of sand and sentiment that Carter described as, “Parfait layer of different colors of pudding.”

The layers exposed by Atwater were the first clues to the giant Cascadia Fault earthquake as well as proof that the subduction zone off the coast was capable of tsunami-causing earthquakes. Scientists, before the discovery of the origins of the 1700 Japan tsunami, had thought that a massive tsunami causing earthquake was not possible in the region. Brian Atwater’s work proved that not only were earthquakes of this size and scale possible, but that they also occur every 300 to 600 years.

Based on those findings and general awareness of potential dangers to the region, Grays Harbor received nearly one million dollars to set up tsunami alarms, create evacuation plans and place signs to help direct traffic out of the impacted towns when a big earthquake should hit. The discovery of the origins of the Ghost Forest helps the region immensely, by bringing needed awareness to the dangers of earthquakes and tsunamis for the residents of coastal communities.

The scars left behind in the earthquake aren’t just below the forest. The stumps and trees in the fields are from ancient forests buried when the ground sunk below sea level after the major earthquake. The stumps were originally referred to as the Ghost Forest by early settlers, and the name has stuck since. The Ghost Forest of Copalis is one of the many local sights that people know about, but few ever take the time to visit.

A handful of people visit the Ghost Forest each year, but locals like Carter are hoping that areas like this will help play a more important role in the future of tourism in Grays Harbor County.

Carter, when asked how he would make the Ghost Forest more popular, he responded simply, “Tourism Grays Harbor is the way to do it.”

He continued by saying,“Copalis and the Ghost Forest are a great place to highlight the recreational opportunities of the region,” and that “we live in a very unique area that nobody outside of the region really knows about.”

Copalis, like many towns in the harbor, have seen better days. With the loss of fishing and timber jobs, the industry and livelihood of the region have taken a beating from a tsunami of pink slips and closed businesses with just a few establishments not sinking away over time. Like the Ghost Forest, Grays Harbor can be a destination of natural wonder and unique beauty.

We live in one of the most beautiful areas in America with tourism opportunities around every corner. The Ghost Forest of Copalis is just one of many unique locations around the region that, if known about, could bring people in from around the nation.

Carter takes these thoughts a step further, saying, “We should embrace the opportunity of a tourist destination. Being outside and being in nature are great activities that we have an abundance of here in Grays Harbor.”

Take a trip out to Copalis, kayak or canoe out to the Ghost Forest and tell everyone you know about it. Let’s use the Ghost Forest as a way to not only understand the risks of living on an active and huge fault line but also to highlight the beauty and tourism power of Grays Harbor.

Have you been to the Ghost Forest of Copalis? Use the #GhostForest tag on Twitter and Instagram to show off your pictures of this local and unique location.