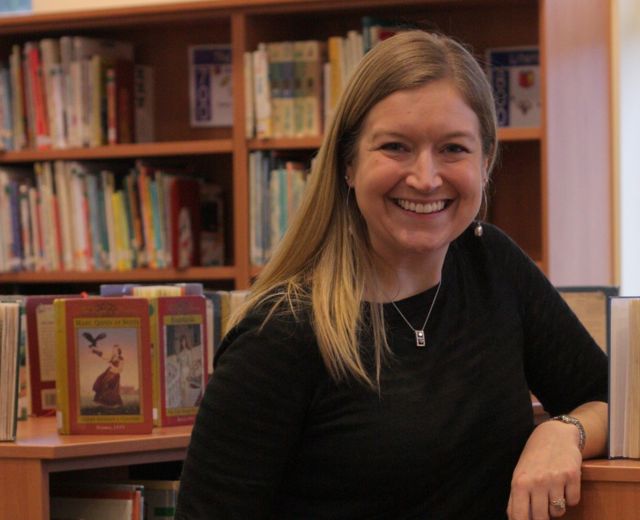 Walking into Simpson Elementary School in Montesano, one will find a buzzing yet welcoming atmosphere. Stephanie Klinger, Principal of Simpson Elementary, can often be seen outside her office, interacting with students by name and talking with the Simpson staff and teachers. She is the antithesis of the stern, unpleasant, and frowning image that comes to mind when imagining a school principal.

Klinger’s desire to teach was realized during a job shadow completed for her high school senior project. Her assignment was to help a fourth grade girl understand math concepts the rest of her class had already grasped. “When the light bulb went off, her excitement was contagious,” Klinger explained. “It was then I knew I wanted to be a teacher.”

Klinger’s credentials started at Grays Harbor College (GHC) before she moved on to attend Central Washington University (CWU). It was at CWU Klinger met Brandon, her future husband. The couple decided they wanted home base to be back in Grays Harbor. Newly married and settling into her next phase of life, Klinger knew going back to CWU was not an option, despite her unfinished degree. As luck would have it, Grays Harbor College and Washington State University (WSU) had just collaborated on a distance learning program for education majors. Through the local GHC campus, Klinger had the privilege of learning, not only from WSU professors, but also from local elementary school teachers. She says the unique experience of learning under local teachers made her education far more relevant and enjoyable than if she had returned to Central.

Klinger went on to accomplish two masters degrees through distance learning, one in teaching and learning and the other in administration. In 2001, she began her career in Hoquiam before taking a fourth grade teaching position in Montesano. A short thirteen years from beginning her career, Klinger is now three years into her role of Principal at Simpson Elementary.

There was some apprehension as she took the job of school principal. As a teacher, Klinger explains the people in your classroom become like family – you take care of each other. Her biggest fear of advancing her career was of leaving those teacher-student relationships behind. “I thought maybe that would be a casualty of becoming a Principal. What I found out rather quickly is that I now have that with the entire school. As Principal, I have the opportunity to talk with and build relationships with everyone in the school. And that’s amazing,” she explains.

Klinger’s personality and desire to connect with students is not the only positive thing that’s come to Montesano since she became Principal. Klinger says one of the highlights of the last three years has been their trend-setting library transformation. During her first year as Principal, she and the fourth grade team applied for and received technology grants amounting to $30,000. These technology grants made it possible for Simpson to acquire iPads for the students.

The iPads are one step in transforming traditional libraries into information media centers. The goal is to teach kids to utilize technology as a tool, not just a video game. The students are taught to use computers to research, collect information, and utilize technology for the better. With the iPads comes a plethora of useful apps. Before the students even reach high school, they are learning important job skills such as typing, word processing, and presentation capabilities. Klinger says these tools are powerful, not just for students, but for teachers as well.

The concept of converting traditional libraries into media centers – complete with books and electronic tools – is being readily adopted in the Montesano School District. Montesano High School was next in line to implement the idea while Beacon Elementary will be introducing the concept to their staff and students sometime next year.

Klinger says the goal for every idea and program is to create a climate at Simpson where teachers and students alike enjoy being and learning in, and to make sure every student has the resources necessary for success. She insists one of the keys to accomplishing this is community involvement. Klinger stresses how important volunteers, parents, and community are in addition to the school staff. Not only will this help achieve student success, but also have a positive impact on the surrounding community. “It all goes back to student success. When we are all working together, students will succeed,” she notes.