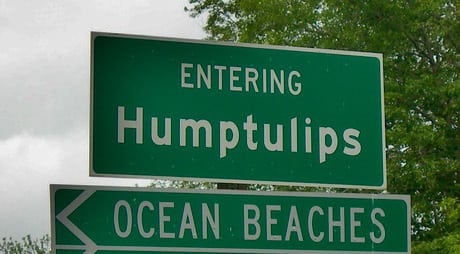 Driving through the town of Humptulips takes just a blink of an eye. But, in that time, the name becomes imprinted on your brain. A 10-letter word on a sign immediately raises questions about what goes on in greenhouses, but you know it can’t possibly mean what you think it does. What is happening to you is the “Humptulips Syndrome.” Passersby are unable to rest until they get answers to their burning question, “Just what does Humptulips mean?”

Maybe that is a bit of hyperbole, but the reality is that hundreds of thousands of tourists drive through Humptulips each year. The name of this river town on the northern end of Grays Harbor County is typically uttered with confusion, laughter and intrigue. Mentioned in best-selling author’s books like Another Popular Roadside Attraction by Tom Robbins, as well as The Long World by Sir Terry Pratchett, the word “Humptulips” is known around the world – but not the meaning.

Outside of Grays Harbor, the name Humptulips isn’t quickly associated with salmon and native heritage. For the rest of the world, it is a name that invokes images of unspeakable actions done unto flowers. In reality, the name Humptulips wasn’t named by English speaking people at all. Humptulips is a Salish word, named as such by the Chehalis Tribe a few thousands years ago. The word and name Humptulips means “Hard to Pole.” This term refers to the difficulty in traveling the river by boat. The Humptulips River was hard to pole canoes up and down stream, caused by downed timber that lined the banks of this beautiful river. While few people today use poles to push themselves up and down the river, it remains rugged, hearty and beautiful.

The Humptulips River is roughly 50 miles long, depending on whether you go up the east or west fork. Running through some of the richest timber country in America, the Hump, as it is called locally, prides itself in world-class salmon fishing.  The salmon swim upstream to the Olympic Mountains and Olympic National Park after traveling thousands of miles in the Pacific Ocean before reaching the river’s mount in Grays Harbor.

Many call Humptulips a city or town, but it technically is neither. Humptulips is a Census Designated Place, or CDP. A CDP is an area that is populated and appears to be a city but does not have a separate municipal government. With a population of just over 200 people, this small community on a hard to navigate river sees quite a fair amount of visitors. In fact, the city sees nearly half a million people drive through each year. For not technically being a city, this CDP sees city traffic.

Visitors from around the world stop off at the only gas station in the small town of Humptulips. Sometimes people stop for fishing advice. Other times, they stop to fill up their car and chat with the folks at the Humptulips Grocery. More often than not, the conversation is started with a question about the name Humptulips. While the employees probably would rather talk about the phenomenal salmon fishing and the store’s incredibly well-stocked fishing tackles and fishing supplies,  they are all more than happy to tell you about the history of Humptulips. Humptulips was named by a proud people who lived along these hard to navigate river banks. Next time you drive through, instead of thinking about flowers, remember the origins of the name and the people who used to call this region home. Traveling up and down river may have been hard, but the beauty, the salmon and the location make this a sought after destination. 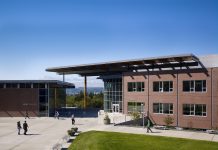 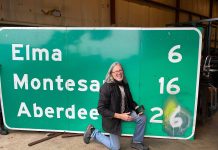 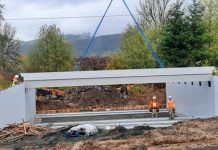