Fondly nicknamed “the great green yonder” due to the area’s abundant forests and seemingly never-ending trees, evidence of Aberdeen’s late 1800s and early 1900s history still remains if you know just where to look. Beginning in the year 1888, the town’s population had grown enough to expand from a village to a proper town. This resulted in a vision for the future, including state-of-the-art buildings, homes, industries and conveniences that can still be discovered today. Take a tour of Aberdeen’s history with these must-see stops.

The year was 1913, and electricity was still a fairly new concept. After the construction of the beaux arts and neoclassical terra cotta structure was completed and the over 1,000 exterior light bulbs flickered on, residents of Aberdeen couldn’t help but admire its beauty. Stories state how the Light and Power building shone like daylight in the dark of night as it reflected off of the marble facade. Over the years, a variety of residents occupied the space including store owners and practitioners. To this day, the Electric Building remains an important staple in the downtown corridor.

A quick glance at the Chehalis River certainly doesn’t do justice to the deep history that flows heavily through its banks. As the former lumber capital of the world, Aberdeen was a major player in the import/exportsphere . Being a day closer to Asia than any other port on the west coast offered immense advantages to the power players in the area that was quickly capitalized on. The Chehalis River also proved useful to the Grays Harbor Motorship Corporation in 1918 as they built 15 ships to be used in World War I’s Emergency Fleet. The shipyard covered 10 acres along State Street (then, Hume Street) and was considered one of the best equipped shipyards in the country. Additionally, the Port of Grays Harbor shipped its billionth board foot of the year on the Japanese steamer, Kashu Maru in 1924.

This four-story structure was completed in 1926 to house the all-new Aberdeen Elks Lodge at the cost of $300,000, a very large sum for that time period. In its day, it was widely known as one of the most magnificent fraternal structures in the Pacific Northwest.

Today, it’s been transformed and modernized into an impressive event space, Soiree on Broadway. Located on the second floor, the four large multipurpose rooms help shape this large, historic venue. The towering windows stretch up along the ceilings and offer views of downtown Aberdeen, while the quirky features such as stairways to former Elk member’s living quarters and hidden lookouts in the walls create an imaginative setting. Below the event space are modern businesses including Steam Donkey Brewing Company, CaKeCaKes Gourmet Treats, Tinderbox Coffee Roasters and Grays Harbor Wine Sellars.

The nicely paved streets throughout the City of Aberdeen that we see today are not the same streets that horses and people used decades ago. Back then, the streets were made of planks of wood. Since there was no settled earth to build proper streets upon, planked streets were implemented instead. At high tide the boards that created the planked streets would rise up as the river water levels increased. This would only have been a problem for homes and businesses on the flats rather than those located at higher elevations,  such as up Broadway Street. Residents would step outside and discover that the planks were no longer in place and, after the tide receded, the planks would of course move out with them.

This ornate neoclassical structure is the home of the well-known Wiitamaki Jewelry Store, but the history goes even further than that. Aberdeen’s very own founder, Sam Benn, assisted in the building process that was completed on March 10, 1909. Benn once had an office that he rented out at the front of the building. One day, he heard a strange noise coming from the boiler and escaped just in time to avoid an explosion that could have killed him.

The first major occupant of the space was the Aberdeen World, christening the building “The World Building,” which would later go on to become The Daily World that’s still publishing newspapers in Grays Harbor today. After occupying the building for a time, the newspaper company moved out and the Grays Harbor National Bank moved in. Following the bank’s time in the building, Ali Baba’s Night Club had a stint in the space during the 1970s, welcoming movie stars including John Wayne as he filmed scenes for the film, McQ. Take a visit to Wiitamaki’s today and marvel at the historic structure that’s held so much history over the years.

Formally known as the “Restricted District,” this area of Aberdeen during the early to mid-1900s was strictly off limits to women and children and was centered mainly along State Street and F Street. Directories listed the area’s brothels simply as “female housing” to try and disguise them. Within the industry, the atmosphere was not at all glamorous. For fear of being recognized in public, many of the madams did the shopping for ladies of the night or, on special occasions, shop owners would keep their doors open extra late for them to run their errands. Although the district was very popular among the large numbers of loggers and seamen that resided in and visited the city, the end of the industry came in 1959 when Aberdeen Police Captain, Nick Yanstin took an unauthorized trip to one of the famous houses and began the unravelling of one of the Northwest’s major brothel hotspots.

Corner of G and Heron Streets

Perhaps the most well-known character from Aberdeen’s early history is the villainous, Billy Gohl. Although the actual building on F Street where Gohl performed his murderous deeds is no longer standing, Billy’s Bar and Grill offers a taste into the history of the city and the man behind the name. The building was erected in 1910 as the Crowther Wooding Building and would go on to house the Red Cross Pharmacy in the 1930s. As the 1950s rolled around, so did the wave of brothels throughout the city, one of which housed prostitutes. The Elnora Rooms were located upstairs in the building and welcomed sailors and other patrons. Today, the restaurant has kept the same overall vibe from the rough and tumble days in Aberdeen while serving up delicious food and drinks. 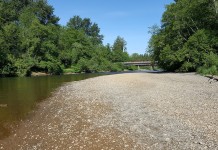