Home Events Ralph’s and Bayview Thriftway Are Fired Up About Hatch Chiles and Summertime...
Facebook21Tweet0Pin0

The novel coronavirus pandemic won’t be cooling down the annual Hatch Chiles Roastings at Ralph’s and Bayview Thriftway. This tradition has been alive and well for over five years and the team at Stormans is as excited as ever.

The Roast is On

Hatch chile fans have four opportunities to see the roasters in action at Ralph’s and Bayview Thriftway. From 10:00 a.m. to 6:00 p.m. stop by Ralph’s on August 21 or September 4, or at Bayview on August 28 or September 11, to pick up as many pounds of fresh roasted Hatch chiles as your heart desires while supplies last. “We have customers that put them on everything,” says Nate Conat, produce manager at both Stormans locations. “One customer gets 100 pounds of extra hot chiles every year and freezes them because he uses them in so much of his cooking. I do a special order for him.” Nate says he’s bringing in about 5,600 pounds of these wildly popular peppers this year.

What does one do with a roasted hatch chile? Chop it up and put it in eggs, on pizza, in macaroni and cheese, or on a burger. Make your own salsa or hot sauce. The possibilities are endless. These peppers come right from Hatch, New Mexico, and people who like them can’t seem to get enough. They look a lot like an Anaheim pepper, but with a more distinct flavor that evolves particularly well when roasted. “We even take Anaheim peppers off the shelf during Hatch season, just so there’s no possibility of a mix up,” Nate explains.

The chiles are also popular because they are harvested and delivered in distinct heat categories, so folks can choose the intensity that’s right for them without losing out on the pepper’s delicious flavor profile. “We start the roasting day with two to three cases of mild peppers, then move to the medium, then the hot,” Nate explains. “We finish out the day with the extra hot.”

Departments across the stores get involved with Hatch season. In the meat department, they’ll be pre-making burgers and bratwurst loaded with fresh Hatch chiles. In the deli, they’ll be preparing special salads and side dishes using the fresh chiles as well.

Pick up a tub, a box or a pallet of fresh roasted Hatch chiles for $3.99 per pound. You can also pre-order online at olythriftway.com. Rest assured Stormans is taking all necessary precautions, including face coverings, gloves and a socially distant pick up system.

Listen up, beer lovers! Adding to this year’s Hatch hype is the arrival of some new brews in the Thurston County. Rob Backman, manager of beer, wine and spirits at Ralph’s, is thrilled to be unveiling offerings from a fairly new Seattle-based beer maker called Old Stove Brewing Company. Based in Pike Place Market, Old Stove hadn’t canned their beers for distribution outside of Seattle proper until now.

“With our recent pivot to packaged cans due to the pandemic, we are now able to reach a wider audience and let them know about our products,” explains Brian Stan, co-founder of Old Stove. “We hope that new fans will pay our craft brewery a visit the next time they are in the Pike Place Market.”

“We’ll be featuring a pilsner and a summer ale alongside the Hatch Chiles Roasting,” Rob says. “These are fantastic summer beers that will really complement the heat of the chiles in just about any dish.” Pick up a 6 pack of either variety in 12-ounce cans, or a 6 pack of their blackberry sour. You’ll also find 16-ounce cans of a hazy IPA and a double IPA in 4 packs at either Ralph’s or Bayview.

Not everyone likes beer and that’s okay. That’s why Ralph’s and Bayview stock a great selection of local wines as well. Finn Hill Winery, based in Woodinville, is a local favorite regularly featured on special at Ralph’s only. Their most popular summer varieties, fully stocked at both Stormans locations during the roasting event, are Le Fantome Blanc, a 2018 Pinot Gris that pairs well with summertime favorites like shellfish and crab cakes. “It’s fruity but dry but it goes really well with all kinds of different dishes,” says Rob Entrekin, founder of Finn Hill Winery.

Finn Hill’s 2018 Blondie Rosé is also not to be missed, particularly paired with the heat of a Hatch chile dish. Year-round red wine fans can look for Le Beau, a 2014 Cabernet Sauvignon that complements steaks on the grill or a 2013 Merveille Merlot, which pairs exquisitely with any number of savory dishes, from pizza to burgers to herb roasted chicken (or how about a batch of Hatch enchiladas?).

“We understand that 2020 has been a hard year for local producers of all kinds,” says Rob. “I feel confident that we can pull through this if we keep supporting one another. Local will keep the lights on.” Rob hopes to be able to do more events like the Hatch Chiles Roast to bring local producers together and amp up brand visibility.

Mark your calendars for the next four Fridays! That’s August 21 and September 4 at Ralph’s, and August 28 and September 11 at Bayview. Don’t miss the Ralph’s and Bayview Thriftway 2020 Hatch chile roast. 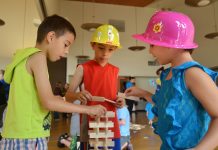 Crews Close Us 101 Simpson Avenue Bridge in Hoquiam Overnight for...

Adopt-A-Pet Dog of the Week Capone