Home Activities Where to Surf in Ocean Shores
FacebookTweet

The rhythmic sounds of the pounding surf are soothing to some, but for a certain type of person, they are a siren song. As the waves grow larger, so does the stoke to grab your board and head for the coast. Where seals and gray whales swim and not far from the place where tourists fly kites and wander the dunes, surfing out on the breaking waves of the coast is an incredible way to spend the day. Out in Grays Harbor, where a long sandy spit juts into the northern harbor, you’ll find the breakers of Ocean Shores. For surfers, Ocean Shores is unique giving all abilities plenty of ridable waves in a small beach community, where gorgeous sunrises and sunsets are as common as catching the perfect wave. Here is where to surf in Ocean Shores.

Before heading out, Ocean Shores, head to North Coast Surf Shop. They not only have rental gear and lessons, but are also more than happy to share the latest conditions and answer your surfing-related questions. They will also let you know how to stay safe in the rip currents that are found in the region. You can also check out the projected surf conditions online at the Magic Seaweed website. The website is incredibly useful, as it has wind speeds and directions, wave heights, weather forecasts and swell ratings, helping you plan your day on the waves.

Ocean Shores has over six miles of beach open to the public to explore, but for those in the know, there are two can’t miss spots while in town. While any stretch of beach will get you waves, Damon Point and the jetty at the southern end of the peninsula, are the most consistent.

After swinging by North Coast Surf, many will head to the north jetty. This is the overwhelming favorite spot for Ocean Shores surfers. Sometimes called “seal heaven” for the amount of seals that frequent the waters, the jetty is fast and fun. The normal length of rideable waves is around 50-150 meters, while the good days, when there is a southwest swell with east winds, you’ll get 150-300 meters. Head here at low and mid-tide, but watch out for driftwood and rip currents. If the swells are over 10 feet, this can be a little dicey, as the paddle out can be quite rough.

Damon Point is still a bit of a hidden gem for surfers, but every year grows in fame. While there are waves all around on this peninsula, the best spot breaks inside Grays Harbor on a sand bar, looking southwest from the beach. Damon Point offers fast, steep waves during storm surges and steady, reliable waves and is best with a swell of at least five feet. As curious seals pop their heads out of the water, the breaks here are close to shore, giving minimal paddling for maximum reward. The best days at Damon Point will have south or southwest swells with north to northwest winds. Bad days have seen many broken boards.

Between the experiences found on the two beaches, Ocean Shores is a great spot for surfers looking for something a little different. Damon Point and the north jetty may not become everyone’s favorite spots, but those who ride gain a deeper appreciation and respect for this wild, coastal stretch of the Pacific Ocean. Surfing in the Pacific Northwest is often viewed as an activity for the hearty and the adventurous, and those assumptions aren’t totally wrong. The water temperature off of Ocean Shores typically hovers in the mid-50s to mid-40s. The cold waters may have those curious about surfing a little shy to get on a board and paddle out to a wave. A wetsuit is highly recommended to surf off the coast, with some preferring to go in a drysuit on the colder, winter days. Yet, despite the cold water, eagles circle overhead and seals pop up out of the water, making it worth the chill

Be sure to check the tides, put your board on your car and head out to Ocean Shores for a truly Pacific Northwest surfing adventure. 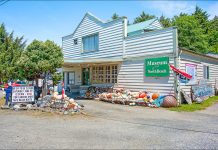 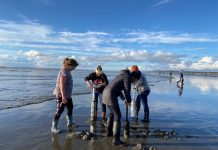