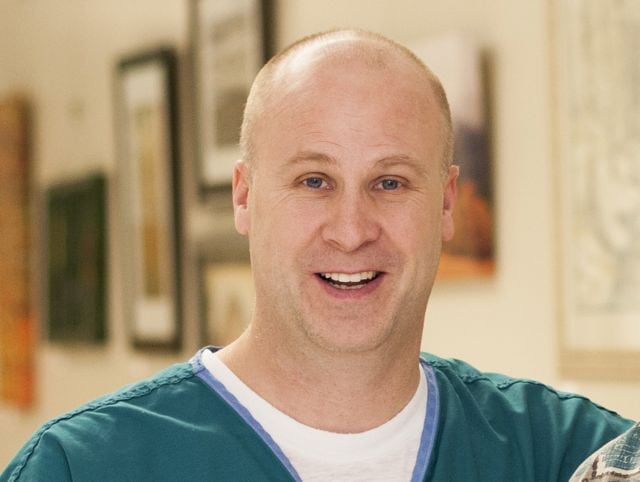 The Physicians of Grays Harbor Community Hospital (GHCH) choose a fellow doctor each year who can act as a representative of the group as well as give direction to the Medical Executive Committee, making sure all physicians follow the bylaws and ensure quality of care. This year, Dr. Ryan Farrer was elected by his peers to lead the hospital in this role.

Dr. Farrer moved to Aberdeen with his wife and four children 10 years ago. He and his wife were drawn in by the active Northwest lifestyle that Grays Harbor had to offer as well as the opportunity to work in the Radiology department of GHCH with their state of the art imaging equipment. The environment was much different from his experience being raised and educated in the Midwest and mountain west of the United States, but he is sure the choice to move here was a good one.

His four children have grown up in Aberdeen, and the oldest, Brad, graduated from Aberdeen High School last year, and his second born, Madison, graduated this year. All four kids have been highly active and involved in athletics and music programs while the two boys have been involved in Boy Scouts along with their dad as a Scout Master for five of those years. The family is also highly involved in their church where Dr. Farrer was recently chosen as a Bishop to their local LDS community. His work goes beyond ministering to the people, but he also is able to work with the youth and welfare programs where he can ensure the help for the poor in the area.

Grays Harbor Community Hospital CEO, Tom Jensen says, “He is a vital part of the community,” and that is exactly what keeps Dr. Farrer drawn to Grays Harbor. After living in much larger cities, the size of Grays Harbor was a nice fit for his family. He feels that it’s the right size where an individual can actually be involved and make positive change rather than be “just one small cog in the wheel.” He was particularly drawn to GHCH for this reason, where he says the administration is helpful and willing to work with the physicians to ensure quality care.

“We’re invested in the community,” Dr. Farrer explained. His investment goes beyond keeping his family healthy and happy, he acts as a leader and guide to many in the area, whether it’s through his work examining patients and delivering high quality care at GHCH, aiding in spiritual growth through his church, or being involved and getting to know families and parents who have a connection to the local schools.

His leadership opportunities continue as he has recently chosen to run for a publicly elected commissioner position along with the Public Hospital District campaign in order to ensure positive change with the state of local health care.