The Hokey Pokey. Shoot the Duck. Alligator Tag. Fast skating. Dice game. Do you remember it? It’s still happening. You do the hokey pokey, and you turn yourself around, and you find yourself back in 1984.

The first time I stepped into the Harborena Roller Skating Rink, I was booking a birthday party for my five-year-old daughter. I hadn’t stepped foot in a roller rink in at least 25 years. It echoed and it was a little magical, taking me right back to a time in life where pure joy was derived from the whirring of wheels and the rush of sugar, adrenaline, and the synthesized beat of “Rock Me, Amadeus” booming over the speakers. A couple weeks later, there was my daughter, with a grin spread across her face, skating furiously to today’s Top 40.

The history of Hoquiam’s Harborena tells of a hardworking, fun loving family. Jens Boeholt, the owner, told me a story of dedication and community outreach that undoubtedly has touched most people in the harbor at some point in their lives.

Jen’s father, Ernie Boeholt, hand-built the rink in 1948. The family definitely has roots in the skating business, with Jens’ brother born in the skate room with the clamp on skates and a barrel stove, during the depression.  I asked him why his family left their established rink in Puyallup, and with what I soon learned was his tongue-in-cheek approach, he let me know, “Rain.” He clarified, “Every drop of rain is another skater – lots of rain.”

Ernie was originally from Denmark, where his father was a stone keeper for the castle for the King of Denmark. Born in 1904, he came over in 1908 on a ship out of England. Entering heavy fog, they waited for three or four days so the U-boats didn’t know when they were leaving. They snuck out, and finally made it to Ellis Island, where they got their papers.

Life in Hoquiam began years later, coming to the harbor and basically started by chopping down the blackberries. Next, Ernie drove 155 pilings in the ground. Jens told me, “the water could wash away 20 feet and the pilings would still hold up the concrete. Dad put steel trusses in here that they built right on the floor, welded them.” A welder named Ed Patrid did the welding and his dad cut all the metal. When they dropped the 120 foot pieces of metal off the truck, half of it went underground because of the weight.

Jens led me through the rink, telling stories of building walls, and showed me the perfectly laid Birdseye Maple floor, nailed down by his younger version and his sister. Through his stories, the inside of the rink seemed to fill up with the decades of skaters that have come and gone and a distinct reality of the amount of work the Boeholt family has invested in the rink.

I’m pretty sure I didn’t miss a square inch of the rink from the under floor’s joists, with tongue and groove board, to the roof with the 25-year warranty, that he’d just received a note that it was up.

It is obvious this family knows the value of hard work and creating something that lasts. Their business sense combined with smart choices seems to be something that was passed on through the generations. For example, to lessen the weight, the heavy walls were built with pumice, which floats, in place of concrete blocks.

The immensity of the project become clear when it is explained that each of the 120-foot metal trusses were brought up with the help of Joe Keiker, a logger, who helped hoist each one with a log stood on end and winches. Careful measurements led to a perfect execution, drilling of holes, and placement of bolts.

Private parties are available for blocks of time on Saturdays and Sundays. There is open skate from 1:30 – 4:00 p.m., but party slots are still available. A private party will run roughly $150, with a $2 charge per skater. Weekday parties are also available. A table is provided.   People are permitted to bring in any food they would like. Of course, night skating is a highlight.

What seems almost natural with a family that seems to love fun is celebrations. They have holiday parties, including the Turkey Hunt, Mistletoe Parties, and Halloween Dress up. I was a little concerned when Jens told me they used a real turkey for the hunt, until he told me they were frozen. Imagine that skidding across the Birdseye Maple. However, one memory included a story about his boy putting on a gunnysack with glue and feathers – he got down and did shoot the duck, and the kids would try to catch him. 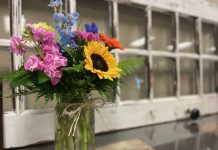 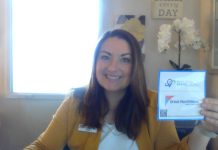