When patients are getting ready to leave the hospital, understanding and remembering important information may not be practical – or even possible. Some are in pain, others are on medication that could cloud their thinking, and most just want to get home.

“There’s always a big rush,” says Kristine Morrison, Director of Quality and Compliance/Risk at Grays Harbor Community Hospital. “They may not remember to fill their prescriptions or go to bed and forget to call their doctors. The best practice is to have a nurse call the patient within a couple of days to make sure they have all the tools they need.”

But, with a limited number of staff, the hospital has not historically been in a position to make those calls ­–  until now. In October, 2016, GHCH launched a trial collaboration with Cipher Health, a healthcare technology company committed to improving patient outcomes and experiences through enhanced communication and care team coordination.

Between October and January, 2017, nurses and other hospital staff learned how to integrate post-visit phone calls to patients with a recording of the patient’s discharge instructions and follow-up care by their nurse. Patients had the chance to indicate if they needed a call from a GHCH staff member related to any specific aspect of their care.

The program has proven remarkably successful, offering benefits beyond the patients and providers, extending to relatives and caregivers as well. “It serves as a safety net,” says Traci Johnson, Quality RN at GHCH. “Just having one more person reaching out and making sure that patients have gotten their medications and scheduled their follow-up appointment makes a difference.”

When patients get home, they can call a phone number to listen to their discharge instructions again, easing the minds of relatives, says Sheila Casey, Director of Medical Units. “The families feel more comfortable. Sometimes they’ve gotten a lot of information and now they can call back and confirm what they heard.” Messages are stored for 30 days after a patient is discharged.

Caregivers have also provided positive feedback about the system, says Morrison. “Sometimes when people get home they’re confused about what medication to take or maybe they’ve lost their meds altogether. A couple of caregivers have called and we’ve been able to go step by step through the medications and remind them about certain instructions from the doctor.”

In one case, the system caught a missed connection between the hospital and a local pharmacy. “We have an electronic process where prescriptions automatically go to the pharmacy,” says Morrison. “On the follow up call to the patient, we learned that they had never received the prescription and the patient had never called the pharmacy. It was all because of a glitch in the electronics, but how long would that patient have sat at home without their medication if we hadn’t called?”

In another case, a patient gave the wrong name for the pharmacy and their prescription ended up in a location that wasn’t what they expected. Again, the program caught the problem.

On the provider side, the system saves time and confusion. “We used to get a lot of calls at the nurses’ station with questions for specific nurses, but the nurse who actually took care of that patient wouldn’t be available,” says Casey. “We’d spend a lot of time and effort trying to find ways to help those patients.”

Some physicians will write out more detailed instructions with the new system, knowing they know they’ll be recorded for patients, notes Jamie Tulley, Director for Surgical Units. “We’ve also seen that some of the clinicians who aren’t based here at the hospital love this idea.” 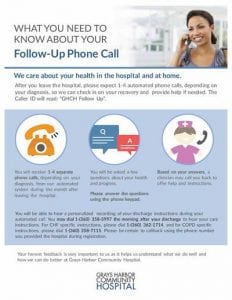 So far the results have been compelling. From October 12, 2016 to January 12, 2017, 760 calls were made to patients in which 89 percent of those called were reached and offered assistance. If a patient indicated they needed assistance, hospital nursing staff called them back in an average of less than one hour and were able to resolve 177 issues. More than 70 percent of all patients who were reached said the voice call was helpful. One key outcome of the trial was that people who answered the call and participated in the system were 69% less likely to be readmitted to the hospital within 30 days of discharge.

Now that the trial period is over, the hospital intends to keep the program and bring it to other departments, says Morrison. “It’s been embraced by the administration as something that’s good for patients. We’d like to expand it to serve patients in medical, surgical and critical care units.”

She also sees potential for ER patients, those in family birth centers and more. “We could expand it to clinics that perform endoscopies and colonoscopies and if we add new types of surgeries, we could follow up using best practices to make sure patients get a set of standardized questions in a timely manner,” she says. “The potential is amazing.” 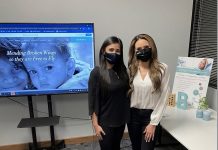 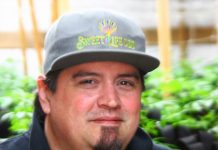 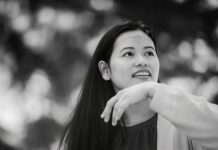