Just outside of Aberdeen, at Grays Harbor College (GHC), five exceptional individuals are hard at work as “fish labbers,” with the John Smith Aquaculture Center (also known as the Fish Lab). These Chehalis Watershed Heroes are Lauren and Maddie Thompson; Evin Brattain, Marina Latimer, and Ellis Graham, and find themselves at the Fish Lab long after their paid work shifts have ended —volunteering hours and hours at the aquaculture center.

The center, was first constructed in the 1940’s and has been in its current location since the 1980’s. For six decades, the center provided salmon educational, ecological, economic, and cultural learning opportunities. However, when the economic recession hit in the mid 2000’s, teaching staff was lost, and the aquaculture center’s equipment was sold or given away – and the building stood empty from 2008-2015.

In 2014, Dr. Amanda Gunn was hired to teach microbiology at the college.  She along with students and staff, understood the value of the center, and were driven to revitalize the fish lab. The students and community volunteers who worked at the center, quickly became known as “fish labbers.” The first fish labber, student Joe Kalisch, had expertise in plumbing and carpentry, skills that were instrumental in restarting the aquaculture center. In addition, labbers built an aquarium, chiller and invented an aeration system.

In 2017, Lauren and Maddie began classes at GHC. These first-generation college students have lived in Elma their entire lives. However, before coming to Grays Harbor College, said that they knew nothing about salmon.

Lauren said, “I really did not like high school, but finished my necessary high school credits by attending our local alternative high school. My sister and I decided to attend GHC with the plan of getting into the nursing program. One of our first classes was microbiology, and Dr. Gunn asked for volunteers, which we did. Through volunteering at the Fish Lab, a whole new world of science was opened for us. We have been able to learn so much about aquaculture by touring and volunteering at several other local hatcheries including Lake Aberdeen, Quinault, and Gingham Creek hatcheries.”

Fellow Fish Labber, Marina is from Raymond and was homeschooled before starting at GHC. “When I first came to GHC, I did not know what I wanted to do, except for the fact that I wanted to contribute to the environment. I am now accepted here at the college and am one of the main fish labbers.”

Evin Brattain, a native of North Beach also joined the Fish Labber team. “When I first came to GHC, I was worried that I did not know what I wanted to do. I enrolled in Ms. Gunn’s Biology 100 class and I loved it. When asked, I volunteered in the aquaculture center because of my great interest in fish, and for course credit, but I kept coming back because I enjoyed it.  Now, I am always here. I am an avid fisherman, but before I never knew what is needed to keep fish healthy “

Ellis Graham, is the one watershed hero not from Grays Harbor County. “My family moved here three years ago from Oklahoma. This is all new to me – the ferns, mosses, the trees, and the salmon. However, like my fellow Fish labbers, I am always here”.

These core fish labbers are managing a working hatchery and in 2018 helped to raise 5,000 coho and 10,000 chum salmon from eggs. The eyed-salmon eggs come from local hatcheries and are reared in the gravity-fed hatchery system supplied with water from the College’s Lake Swano. In the months of March and April, local children are invited to release the baby salmon fry.

Fish labber Lauren said, “The kids are so excited. The aquaculture center’s seasonal hatchery is open to the public and to school groups from late December through May.”

Also, in 2018, 1,000 juvenile rainbow trout were reared at the aquaculture center. And for the first time in over a decade, Lake Swano was available for recreational fishing for the community. A fishing derby was also held, and the fish labbers helped to conduct a Fishing 101 Clinic.

“The derby, along with another one held at Lake Sylvia were great ways to acquaint kids to the joy of fishing. One of the trout fish caught was 8 pounds!” said Evin.

“It’s so exciting to work with children” said Maddie. “Connecting kids to the outdoor world, in their everyday lives. Learning what it means to be a fish in warming water.”

The students have also joined forces with many community organizations and state agencies to collaborate and take on leadership roles on restoration projects. They worked on riparian restoration along Alder Creek, and Fry Cove; and with the Chehalis River Basin Task Force to plant 500 willow stakes on a farm newly acquired along the Wynochee River.

In 2018, the fish labbers along with 260 other community members, completed over 3,400 of volunteer hours.

During the day of work to celebrate the life of Dr. Martin Luther King, in January 2019, 41 community volunteers joined the fish labbers and picked up over 400 pounds of garbage from Alder Creek. This included trash included tires, and even a gas generator.

Dr. Gunn early on noticed that women were underrepresented within natural-resources degree programs including fisheries and aquatic sciences, as well as absent from higher-level fisheries policy discussions.  So, she and other faculty members have worked diligently to help students build their leadership skills via enhanced experiential learning, mentorship, and direct science-related collaborations.

With guidance from Dr. Gunn, Maddie and her sister Lauren received funding from Grays Harbor College Foundation. They traveled to the Big Island, Hawaii and explored the University of Hawaii’s, Hilo aquaculture program and explored future partnerships.

“It was a fantastic learning opportunity” said Maddie. “Live and in action! I did not know how to swim before I went to Hawaii, so I had to learn how to. We got to swim with sea turtles, and to see such colorful fish when we went snorkeling. The fish were so different than ours. We also learned so much about the University’s research and worked to build strong pathways between GHC and The University if Hawaii at Hilo. We also built our own pathways. My sister and I plan to continue our education at Hilo, Western Washington, or at the University of Washington with a focus in marine biology.”

Also enthusiastic about their fisheries field work, Evin and Marina also plan to continue their marine biology education at a four-year university. This is a key goal of the fish lab –to help build bridges between GHC students and careers in the STEM – Science, Technology, Engineering and Math and the natural resource field.

“The Fish Lab is a community and student-driven program where participants have the opportunity to gain experiential learning and informal training in fish hatchery operations, stream monitoring, and resource management” said Dr. Gunn. “I came to this college to teach microbiology but stayed for the community.  I remain convinced that we are living in a town full of ecologists.”

Anyone can volunteer with the fish lab and continue the work of the late John Smith, longtime GHC college biology professor, for whom the center is named.

Hours are Monday or Wednesday at 3:00pm, and Discovery Hours on Saturdays at 8:00am when school is in session.

Fish labber Lauren said, “It doesn’t matter who you are, if you are a kid or an adult, or what your skill set is, you will always find that what you have to give will have value, and a purpose here.”

This article is brought to you by the Chehalis Basin Lead Entity. To learn how you can be involved in salmon habitat restoration and protection in the Chehalis Basin, visit our website: www.chehalisleadentity.org 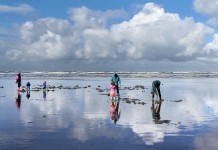 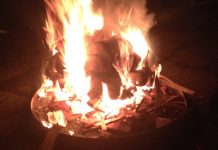 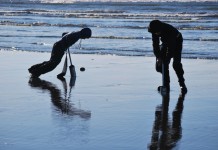