Jim Napier is a full-time deliver driver for United Parcel Service (UPS) since 1988.  In 1999, he added a new dimension to his shipping knowledge by starting United Package Express (UPX), a packing and shipping outlet in Aberdeen.  Not only did his new business contribute to the local economy but the family business provides quality employment for the Napier kids.

Jim uses the word “blessed” a lot, whether it is in reference to his wife, Denise, his nine children, his four – soon to be six – grandchildren, his job at UPS or his business.

“My family has been very blessed to be able to serve the community and UPX is something that our family has been blessed by,” Jim said. “It has been great for the kids to learn business skills in a comfortable environment. We can discuss things like customer service, community involvement, profitability, expenses and the other aspects of business. It has been a great tool for us to teach the kids. It has also been a great blessing to us, since it has allowed them to have jobs that are in a good environment that gives them good skill sets to grow into adults.”

Jim and Denise’s three oldest children – Tara, Paige and Chase – each worked at UPX for at least one year before moving on to other things. Chase’s tenure was the longest at around seven years. He worked there through many of his teen years and his college career before moving on to a job with Washington State a few years ago.

“I like to feel good about their experience there,” Jim said. “It’s more than just a punch-in, punch-out job. You really get to know the people that we serve. You need to know about a lot of different things and wear a lot of different hats. Chase has told me repeatedly that, since working for the state, even though he’s the youngest guy on the block, since he knows how to use Power Point and Excel and knows how to take the data that other people have and make it look good, he feels like he’s invaluable. It’s nice to hear that he was able to use some of the things he learned.”

Two of Jim’s children currently work at UPX. Piper is 18 and recently graduated high school and is very close to earning an Associate Degree from Grays Harbor College.  Her brother, Hutton is sixteen and will enter his junior year of high school in the fall.

When Jim first started the business, he thought that he may leave his job with UPS to run the business with his family. However, he decided to keep his day job, in part due to his large family’s health insurance needs. Jim will be eligible to retire from UPS next year, but he has not yet decided when he will hang up his brown uniform.

“UPS left Aberdeen (and moved to Elma) in March of 1999. It left a void, because there was no other shipping counter,” Jim said. “When we first started the business, the idea was to provide a service to the public and eventually maybe I could shift to running the store myself. A byproduct of that is it’s a great place for the kids to work. They have all benefited, not just financially, but in their development. It has helped them understand business concepts, customer service and being able to relate to people. It has served our family well, and it will for quite a while in the future.”

When he does decide to retire, Jim plans to be more involved at UPX and perhaps even expand the business. He also wants to spend more time in ministry and do some mission work.

Jim believes that UPX provides a much needed service to the community. In addition to packing and shipping, UPX also offers copying, faxing, scanning, printing, laminating and notary public services.

“Shipping can be kind of intimidating,” Jim said. “It’s not something that a lot of people do frequently, especially when you’re dealing with fragile, high value, or time-sensitive items. We ship a lot of perishables – clams, berries, pies – and pack a lot of fragile and expensive items. All those factors can be kind of alarming when you think about it. We also offer all of the carriers under one roof. We help the customer make an informed decision and compare options. On top of that, we can tell our customers how things should be packed or pack their items for them. The insurance is really only as good as the pack job, and we know how to pack things to the carriers’ specifications so there are no problems.” 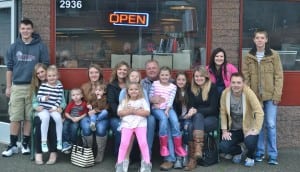