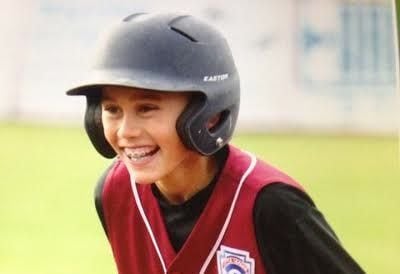 Cole Daniels’ Little League Baseball season ended on July 5 when his Montesano all-star team lost to Chehalis 3-2 in the district title game. However, a summer that will undoubtedly be one of the most memorable of his life was just beginning.

Little League Baseball games are filled with coaches, fans and players cheering and encouraging their team. Many youngsters develop sportsmanship and leadership skills from playing sports, but Cole stands out from the rest. He was selected as the winner of the 2014 Little League International Good Sport Award.

Cole and his family will travel to Williamsport, Pennsylvania for the Little League World Series in August where Cole will be presented with the award.

“It feels amazing because it’s a once in a lifetime opportunity and not that many kids get to do it,” Cole said of receiving the award. “It was totally unexpected, so I was shocked when I found out.”

Cole’s formula for sportsmanship is pretty simple, and shows wisdom beyond his years.

“On the field, Cole is an all-star. As a person, he is more than an all-star,“ Bove said of Cole in his nomination letter. “He is a team player, not only towards his own teammates, but to all the kids in Montesano Little League. He encourages players and is a role model for the younger kids in our league.”

In the letter, Bove went on to tell a story about Montesano Little League’s 2014 opening ceremonies. A boy named Evan was set to throw out the first pitch. Evan is more than 75-percent blind and needed assistance. When Evan asked to have someone accompany him, Bove asked Cole to do the honors.

When the time came for Evan to head out to his spot, he became nervous, but Cole whispered some words of encouragement and guided him in the right direction. Evan later told Bove that Cole told him to “enjoy this moment,” and “everyone is cheering for you.”

“I walked him out there and he looked kind of scared out in front of all the people,” Cole recalled. “I just tried to encourage him. He was so excited, but kind of nervous at the same time. It was cool to be able to go out there and help him.”

According to the Little League website, the Good Sport Award is awarded to a Little Leaguer who has demonstrated superior qualities of sportsmanship, leadership, a commitment to teamwork and a desire to excel. Cole is an excellent example of these qualities.

“Cole is a leader, pure and simple,” Bove said. “Everybody he touches is better for just being around him. There is not a single person I know he has not made an impression on, whether it is leading by example or simply being a friend they can rely on. He is polite and courteous to everyone, young and old, yet he is still just a child and plays as hard as anyone.”

On August 6, Cole will throw out the first pitch at the Seattle Mariners’ game against the Atlanta Braves. Cole and his family will then get to watch the game from the owner’s suite. Cole is the first good sport award winner from the State of Washington and the Mariners are going to honor him with a slide show on the big screen at Safeco Field.

As if winning a prestigious award and throwing out the first pitch at a Mariners game was not enough, Cole also got to meet Seattle Seahawks quarterback Russell Wilson when he attended the Russell Wilson Passing Academy in July.

It has certainly been an action-packed summer for Cole. However, he has managed to cut through all of the praise that has been heaped on him. He is still an athlete and teammate first.

“Meeting Russell Wilson was awesome, but I think playing in the district championship with my teammates was the most exciting thing,” Cole responded when asked about his favorite part of this summer. “It was my last 12-year-old game. It was really memorable, even though we lost.”