Home 2. Spring Where to Watch Shorebirds in Grays Harbor
Facebook171Tweet0Pin0

Grays Harbor is known for many things – world class fishing, clam digging, access to the Olympic National Park, whale watching and endless adventures in nature. However, there is one aspect of Grays Harbor that sees visitors flocking to the region every year. Each spring, for just a few weeks, the mudflats and beaches of Grays Harbor transform into rich feeding grounds, rumored to host nearly a million shorebirds.

As the shorebirds fly in huge, synchronized groups darkening large portions of the sky, raptors soar high above, waiting for the moment to swoop down and pick off a smaller bird in the air. Shorebirds are visible around Grays Harbor for most the year, making this an excellent adventure no matter the season.

The shorebird migration in the months of April and May is an event everyone should see, highlighted each year by a huge festival at the Grays Harbor Wildlife Refuge. Known as the Grays Harbor Shorebird and Nature Festival, this event draws birders from around the nation, all enamored with the majestic and beautiful flocks of avian who call our region home for a few weeks each year.

While this is a not-to-be-missed event, the chance to see incredible shore birds is possible all year. To have the best shorebird watching experience, there are four locations to visit often. Before you head out, keep an eye on the clock. Your best viewing time is two hours before and two hours after high tide as the shorebirds are closer and more concentrated during these hours. Once you get the tides, remember to bring a pair of binoculars along as well as a rain jacket and follow all nature etiquette and posted rules. The more still and silent you are, the more natural the birds will be.

The Grays Harbor National Wildlife Refuge, located on the western edge of Hoquiam, is one of the underrated gems of our county. Home to the mass migration of shorebirds during the Grays Harbor Shorebird and Nature Festival, the refuge is a year-round favorite for birders. When the tides are just right, the birding is world class, letting you see peregrine falcons hunt for meals, bald eagles soaring overhead and flocks of shorebirds intermixed with blue herons, ducks and geese. If you haven’t experienced this refuge, we suggest you go in late April and early May, when the entire tide flats are seemingly covered with shorebirds. The best viewing will be found along the refuge trail, known as the Sandpiper Trail, which is open sunrise to sunset.

Located at the southern tip of Ocean Shores, Damon Point is a perfect destination for adventures along the Washington Coast. With the Olympic Mountains and Mount Rainier visible in the distance and the waters of the Pacific Ocean and Grays Harbor lapping at the sandy shore, many would argue that seeing shorebirds here is as fantastic as anywhere in the world. Here, over 60 species of shorebirds can be found and many appear to be posing perfectly for your pictures and gaze. Your best bet to see the shorebirds around Damon Point is to walk the four miles of beach, seeing both sides of the sandy peninsula. Many birds will be found at the very tip of the region, as less people walk to the end and even fewer dogs visit this section. After a full day of birding at Damon Point, make sure to drive to nearby Ocean Shores Golf Course and look for other birds there.

Located just south of Grayland Beach State Park, the beach access area near Midway Beach Road is a popular spot for shorebirds migrating through the region. In the spring months, there will be over twenty species of shorebirds in this area, highlighted by the “Streaked” Horned Larks and Lapland Longspurs that frequent this stretch of beach. Even in the off-season, huge flocks of pelicans have been spotted near this area, which is quite rare to see this far north. With eagles constantly flying around and the occasional blue heron sighting, Midway Beach is a fun place to avoid the more crowded parks and have a great time birding.

For a full day of driving and birding, it is recommended you hit up the Westport loop, touching all the birding hotspots in one trip. Starting with the Westport (South) Jetty and Half Moon Bay, make your way back to the Johns River Wildlife Area, ending at Bottle Beach State Park (including its ADA accessible Washington State Birding Trail offering more than 130 bird species). When the tide is right, this entire region is a fun place to go to combine a day in Westport with birding. The tidal flats make for a fun day of watching for wildlife of all shapes and sizes, as well as watching shorebirds, eagles, herons and more from the comfort of your car.

No matter if you visit the annual festival or come on your own, Grays Harbor offers some of the most incredible bird watching around. Pack your picnic, and your spotting scope, and head to the shore for a day (or weekend) to remember. 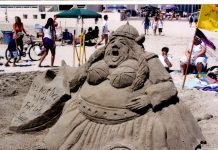