Home Everyday Home Is Where the Heart Is for Nanette Sparrow, Dog House Manager...
FacebookTweet

It was March 2016 when Nanette Sparrow hitched up her travel trailer, gassed up the truck, loaded her two youngest children, John and Cortis, and took off from Alabama for the adventure of their lives. They spent the next year visiting the East Coast, from Maine to Florida, before turning their attention to the West Coast. They travelled from Florida to Texas and ended up in San Diego, California. All along, Nanette homeschooled the children, both of whom thrived in ways not possible had they stayed rooted in Alabama.

They ventured into Canada, but generally spent the winters in Southern California and summers in the Pacific Northwest. In 2018, they were ordered to evacuate due to the wildfires in California and Crater Lake, Oregon. They chose to return to Canada to get as far away from the smoke as possible. It was there when Nanette joined a Facebook group for families who travelled fulltime. Through contacts in that group, Nanette learned that the North Beach PAWS needed a temporary “dog host” while searching for a permanent one.

Their first term was for three months, after which they left for Palm Springs, California for the winter. It wasn’t long before Debbie Valdez, a PAWS board member, sent an email asking Nanette to return. It was then 16-year-old John and 14-year-old Cortis who decided that they were going back to Grays Harbor County.

At the North Beach PAWS, Nanette held many positions: Shelter Host caring for the dogs and providing security for the premises; Intake Coordinator; and Adoption Manager. In February 2021, Nanette officially became the Dog House Manager.

“Cream rises to the top,” said Mike Valdez, an Ocean Shores attorney and PAWS board of directors, secretary and legal advisor. It is clear that Nanette is a valuable asset to the animal shelter and by May 2021, she was asked to sit on the Board of Directors where she can be an even stronger advocate in shaping the future of North Beach PAWS and further its mission of a no-kill shelter by saving all healthy ortreatable animals, or those that have a chance of being rehabilitated.

Nanette and the children are a powerful and formidable team. They work five shifts themselves at the Dog House where they accept dogs, vaccinate them, bathe them, give medication, clean kennels, do mountains of laundry, and supervise and train new volunteers. At the time of this writing, there are 16 dogs living in the Dog House. Several have found their “furever” homes, but the rest are still waiting and hoping. The ongoing pandemic brought new challenges, but Nanette is there with a steady hand and a kind heart, making sure dogs and humans are welcome.

Nanette is full of heartwarming adoption stories.  Alittle Miniature Dachshund named Meemaw  arrived at the shelter with large mammary tumors. Nanette did everything possible to raise money for the needed surgery and aftercare. With the help of Dr. Stacy Steele, surgery removed the tumors and Meemaw was good as new. One Saturday morning, an elderly woman with Multiple Sclerosis and confined to her wheelchair went to the shelter looking for a small lap dog. According to volunteer, Marilyn McFadden, the lady “beamed” when she and Meemaw locked eyes. It was a “perfect match,” and seeing them brought tears of joy to everyone. It was hard to not become emotional seeing Meemaw hop up on the woman’s lap, where she puther hand lovingly and protectively on Meemaw’s shoulder.

What is next for Nanette? She is leaving that decision to her children. So far, they are having a blast working with the dogs and getting to meet new people almost every day. Both John and Cortis also help out at the Garage Sale on Saturdays. Donations, including clothes, books, housewares, tools and furniture, are sorted and sold in a garage sale format. The store has something for everyone and proceeds from the sales all go towards the daily care of the dogs. While shopping, stop by the Dog House and meet Nanette, John and Cortis.

For more information, visit the North Beach PAWS website. Maybe you will find your perfect match, just as Nanette has found hers in Grays Harbor County! 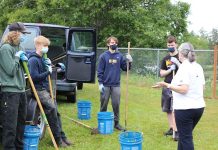 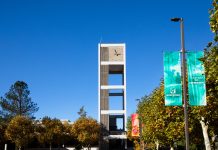 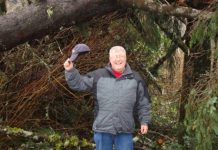