It’s been 20 years since the dearth of Kurt Cobain, the lead singer of Nirvana. The band sold millions of albums and ignited the Seattle grunge movement of the 1980s and 1990s. But before the international fame, Cobain got his start in the small town of Aberdeen.

For several years following his death, there had been little visible evidence in his home town that Cobain ever lived there at all. Due to support from local fans and organizations, several landmarks and memorials have popped up all over Aberdeen in recent years.

Here is a list to help you commemorate Cobain and hit all the hot spots in Aberdeen. 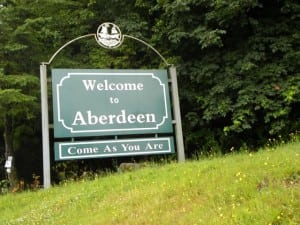 The “Come As You Are” sign:  Located just over the Chehalis River between mileposts one and two on the west side of Highway 12, drivers can gaze upon the “Come As You Are” sign, which immortalizes the lyrics of the Nirvana song of the same name. The large green sign was erected in 2005 with the support of the Kurt Cobain Memorial Foundation, a local non-profit organization dedicated to memorializing the rock star in his home town. The sign is one of the most photographed landmarks in Grays Harbor County. It was also featured briefly in the 2009 film, Management, starring Jennifer Aniston and Steve Zhan.

The only way to photograph the sign is from the shoulder of the highway, as there are no public places to park, nor is there a path around the sign.

McDonald’s, 909 E. Wishkah Street: Most visitors wouldn’t expect a side of Nirvana with their Big Mac, but stroll into the McDonald’s in the Olympic Gateway plaza and black-and white photographs of the band can be found adorned on dining room walls like a miniature art museum.

Kurt Cobain Statue at the Aberdeen Museum of History, 113 E. 3rd Street: The concrete statue of Cobain playing a guitar with a single tear rolling down his cheek, for years sat inside the Hubb’s Muffler Shop on Sumner Avenue in Aberdeen. The creator of the statue and owner of the shop, Randi Hubbard, began building the statue not long after Cobain died in 1994. At one point, Hubbard had offered to give the statue to the City of Aberdeen.

Until recent years, the city was reluctant to memorialize Cobain publicly, largely because of concerns that the controversial parts of Cobain’s life – drug abuse and suicide – would overshadow his artistic accomplishments. In 2014, the statue was moved into the Aberdeen Museum of History. The statue is the start of an exhibit the museum eventually wants to curate, commemorating music that influenced Grays Harbor. The museum is open from 10:00 a.m. to 5:00 p.m. Tuesday through Saturday and from 12:00 p.m. to 4:00 p.m. on Sundays. Admission is free.

It features a sign with Cobain’s picture on it and the lyrics to the song, Something in the Way, which is about the Young Street Bridge at the edge of the park that Cobain allegedly slept under. Cobain immortalized the bridge through music, but now the bridge immortalizes Cobain.

Over the years, thousands of fans have journeyed to Aberdeen to visit the Young Street Bridge, often leaving colorful graffiti. Layers of fan-inspired art decorate the beams beneath the bridge with messages like “Thx Kurt,” “Teen Spirit” and “Nirvana Is Soul Reviving.”

Warning: The terrain beneath the bridge is steep, so be careful when walking beneath it and taking pictures. Fans can also purchase dirt from beneath the bridge at the Star Wars Shop, 143 E. Wishkah Street. The store is open daily from 11:00 a.m. to 6:00 p.m.

The Wishkah River beneath the Young Street Bridge is also the inspiration for the title of Nirvana’s last album, From the Muddy Banks of the Wishkah. Cobain’s family members once spread a portion of his ashes in this river.

Other park features include a purple metal display for “Kurt’s air guitar,” a statue of an actual guitar, and a gravestone-like granite slab with a raised impression of Cobain and eight quotes attributed to him.  Fans can make a rubbing of the impression by placing a piece of paper on top of it. The slab sparked a controversy when it was first installed in 2011. One of the quotes inscribed featured a four-letter word. “Stay away from drugs. They will … you up.” The swear word was printed in full. The quote sparked a media firestorm and backlash from city officials in the days that followed. Less than a week later, Kovach agreed to have the last three letters of the word removed. One of the city council members paid to have the word sandblasted.

1210 East First Street: This home, one of many Cobain lived in while in Grays Harbor, is where Cobain spent his early childhood. Cobain’s room has a hole punched in the wall and graffiti paying homage to some of his favorite bands such as Iron Maiden and Led Zepplin. Last year, Cobain’s mother, Wendy O’ Connor, put the home for sale for half a million dollars.

Some fans have hopes to turn the home into a museum. Jaime Dunkle, from Portland, Ore., has begun a fundraising campaign to turn the house into a museum. To learn more about the campaign, click here. The home is not open to the public, but a video of the interior of the home can be viewed on Dunkle’s fundraising page. The Aberdeen Museum of History has a list on its website of other homes Cobain lived at while in Grays Harbor. Most are private residences, so avoid knocking on their doors asking if Kurt can play.

Westport Winery, 1 South Arbor Road: Cobain is also memorialized through art in a sculpture garden at the Westport Winery. The winery, about ten miles south of Aberdeen off Highway 105 on South Arbor Road, has over two dozen pieces of art on its grounds created by local and regional artists. Artist Jeff Uitto of Tokeland created a replica of the guitar Cobain designed for Fender made out of wood collected from the banks of the Wishkah River.

The winery also sells a pinot noir honoring Nirvana. The label features a baby swimming underwater, paying homage to cover of the band’s album, Nevermind. The wine can be purchased on site or online for $31, and a portion of the proceeds benefit the Kurt Cobain Memorial Foundation. Visitors may taste the wine and take a tour during tasting and touring hours, 11:00 a.m. to 6:00 p.m. daily.

Kurt Cobain left his mark on Aberdeen.  Take an hour or two to visit each of these Cobain landmarks. 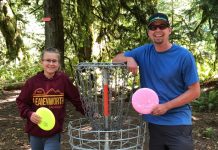