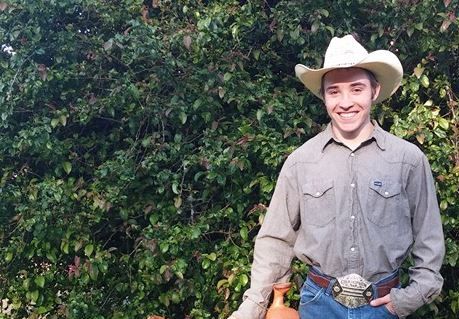 Most four-year-olds don’t have their career paths mapped out. Jake Davis did. All he ever wanted to do, for as long as he can remember, is ride bulls.

Bucking bulls on the Professional Bull Riders circuit usually tip the scales between 1,600 and 1,700 pounds and the beefier ones can reach one ton or more. And yet, these hulking bovines don’t lumber out of the gate when it’s time to go.

They’re athletes, equal parts brawn, quickness and smarts. A lethal concoction, and one with horns no less.

They powerfully spin, violently kick and impressively jump – all with the lone goal of dislodging their riders and sending them crashing to the ground with little remorse.

Even though plenty of safety measures are taken, it remains a dangerous sport.

More times than not, the bull wins, bucking off their rider. Most spectators cringe at the end result. Davis, however, was inspired.

“I know,” the 17-year-old Davis acknowledged, “but it’s the only thing I’ve ever dreamed about doing.”

Granted, Davis, a resident of McCleary and soon-to-be senior at Elma High School, still had to wait until he was 14 to actually ride a bull, but nothing swayed him over the near-decade he waited to begin his bull-riding career.

Usually, childhood dreams fade. If they didn’t, there certainly would be a lot more astronauts and secret agents walking around among us.

It didn’t for Davis.

“I would always ask my mom, ‘When can I start riding bulls?’” Davis said. “Every year I would keep asking. It just never went away.”

His persistence has since paid off as now, just a little more than three years into the sport, Davis is one of the Pacific Northwest’s best young bull riders.

His showing earned him a trip to the National High School Finals Rodeo (NHSFR) in Wyoming in July. It marked the second consecutive appearance for Davis at nationals, which is the world’s largest rodeo, drawing more than 1,500 participants.

“The kid’s got the walk,” said Mike Warford, who rode bulls professional for 10 years before becoming a stock contractor. “If he stays healthy, he’s going to go a long way riding bulls.”

Once he turned 14, Davis, knowing safety was paramount for his mother, went out and purchased a protective bull riding vest on his own, figuring if he already had all the equipment she’d have to say yes. The strategy worked.

“She agreed to let me ride,” Davis said. “You can ride sheep at nine. You can ride steer before you are 14, but I didn’t want that. I wanted to go straight to bulls.”

It was at the Lazy HK Bar Ranch in Mossyrock where Warford first met Davis.

“That first day he came out, I had five bulls and he rode all of them,” Warford said. “You don’t see that very often from a 14-year-old who has never been on a bull before.”

Warford immediately took Davis under his wing and not only coaches and mentors him, but also serves as one of his sponsors.

“I don’t remember too much about that first time, except it was awesome,” Davis said. “I think it proved to me that I did have the skill to do this. From that moment on I just wanted to improve.”

He finished sixth overall in the final bull riding standings this year in the Northwest Professional Rodeo Association, the largest regional rodeo organization in the western United States, which sanctions over 40 rodeos throughout Oregon, Washington, Idaho, Nevada and California.

“It’s rough around. There’s just not a lot of rodeos,” Warford said. “He’s competing against kids from areas where they have a lot more opportunities, Texas, Oklahoma, South Dakota and he’s holding his own. I don’t know how many saddles he’s won. He’s probably won 20 buckles. He’s very humble about it all. He’s just a likeable kid.”

Davis has already held his own against some top-flight bulls. According to Warford, Davis successfully rode Crown’s Legend, a bull once ranked as high as 120th in the world.

“He came down to the house the other day to help out with some chores and I asked him, ‘What did he hope to get out of this?’” Warford said. “And he told me, ‘If I could get on bulls every day, I would.’”

Davis will begin his final high school rodeo season this fall with a chance to advance to nationals for a third straight year.

“My first goal is to get to the National Finals Rodeo,” Davis said. “This is what I want to do for the rest of my life. When I can’t ride anymore I want to be a professional bull stock contractor.”