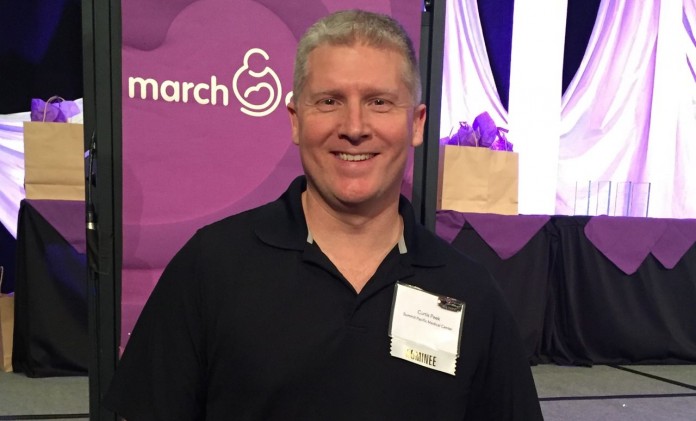 On November 13, Curtis Peek of Summit Pacific Medical Center was “astonished” when March of Dimes Washington Chapter recognized him as one of the top nurses in the state. Recipients are recognized as “nurses whose extraordinary efforts stand out and who every day set the standards of outstanding patient care.”

“Curtis is a wonderful nurse and a great leader,” says Brenda West, Chief Clinical Officer and Quality Director at Summit Pacific. “He is dedicated to ensuring that patients get quality care.”

Peek, who works in Summit Pacific’s Emergency Department, was honored in the Emergency category at the 13th annual Nurse of the Year Awards.

Registered nurses, working at all staff levels in Washington, were honored in 19 categories at a ceremony held at the Meydenbauer Conference Center in Seattle. The awardees were culled from a list of more than 200 nominees.

Peek says he was “astonished” to receive the award. “There must have been 100 other people there (at the ceremony) that deserved the award. I did not think I would be the one to take it home. I am thankful to Brenda (West) for nominating me.”

West is proud of the recognition the award brings to Peek and Summit Pacific staff. She comments, “I’ve had opportunities to watch Curtis grow as a leader in the organization from a staff nurse to taking a leadership role and helping us move initiatives forward. It makes me very proud.”

Peek’s duties include evaluating emergency room patients, as well as working as a charge nurse of the department on a particular shift.

Peek became a nurse in 1996 and joined Summit Pacific in 1998, according to West. Peek thrives on the fast-paced environment of the emergency room and the opportunities to help people immediately.

He says, “The reason I like working in the ER is the immediate gratification of helping people feel better. I am able to give people an answer right away.”

One of Peek’s greatest achievements, while at Summit Pacific, has been the work he has done on developing a process for early identification of patients with sepsis. Early identification of sepsis is critical, as sepsis can quickly take a patient’s life. However, when identified early, staff can take immediate steps to reverse its course.

Chief Medical Officer, Dr. William Hurley explains the importance of being able to identify a life-threatening infection (sepsis) early, “The earlier we figure out a patient is septic, the better the patient’s outcome will be.” According to Hurley, Peek worked with the EMS system as well as nursing homes and others to establish a new identification process.

“Curtis took it upon himself to become very knowledgeable and useful in helping doctors to order sepsis identifying lab tests and cultures quickly and effectively,” says Dr. Hurley. “He has also been part of an education process to teach doctors and nurses to use the tests and order them much more easily and faster than before.”

This all translates into quality, life-saving, patient care. The process Peek has worked on has been so successful, says Dr. Hurley, that “a lot of (our) work has been emulated by much bigger hospitals across the state.”

Quality patient care is not limited to tests, cultures, or lab results. It includes community involvement and understanding patients on an individual basis. Peek’s community awareness has been a definite plus in this regard.

“Because Curtis lives here, works here and grew up here, he brings an additional community perspective to the organization which allows us to provide better, more individualized care for our patients,” shares Hurley.

Dr. Hurley affirms, “I will tell you that our staff here at Summit Pacific is as good as anywhere in the world. This award recognizes that.”

West concurs. She says that while the local community may recognize that Summit Pacific provides excellent patient care, now, as a result of this award, all of Washington knows it too. “It’s really exciting when you think about our critical access hospital competing with large facilities for this award; it is quite an honor for one of our nurses to get it.”

The public is invited to attend a local award ceremony scheduled for Thursday, December 10 at 11:30 a.m. in the Kelsey Conference Room at Summit Pacific Medical Center in Elma. For more information, contact Lauren Day at 360-346-2250.