Myths, mysterious happenings, folk tales, legends and the unexplained abound in city and village alike. Ocean Shores, master-planned in 1960 with hopes of someday reaching a Hollywood or Las Vegas status, is no exception.

Among the lore of Ocean Shores is the tale of a vital figure in the earliest of community affairs. Drawing the world’s attention and greeting visitors to the coastal village, it quickly emerged as the town’s first public symbol – the giant razor clam.

Donated by the Tommer Construction Company, it graced the front of the original Executive Villa Motel, the first structure built at the corner of Chance a la Mer Boulevard and Ocean Shores Avenue.

The massive mollusk became the unexpected trademark for this burgeoning gateway to the Pacific. The story of the famous sculpture forms the foundation for local legends following it’s history throughout the beach community.

A giant wooden razor clam calls attention to itself and isn’t easily passed up. Visitors could hardly pass by without taking a look, one that certainly would produce a lasting memory.

Such a clam should still cause kids and beach nuts to slap its shell or pose beside the monster bi-valve for a selfie. But, sadly, that is not the case.

Its disappearing act and the opinions as to what happened to the clam, including its possible whereabouts, demands investigation of this apparent urban legend.

Where does one begin such sleuth work?

Of course the answer is the internet along with the local public library.

Assistant Librarian Michelle Traer, faced with such an investigative quandary, offers her friendly, eager direction towards possible newspaper stories and two guide books for clues to unlocking the giant clam caper:  Images of America: Ocean Shores by Gene Woodwick and Margaret L. Rasmussen’s The Exciting Growth Years of the City of Ocean Shores.

A 1961 photograph of the clam with model Teri Lee McDougal, a cheerleader and graduate of Aberdeen Weatherwax High School, was shot at the original corner location.

Some town folk claim it spent time in front of Ginny Simms Restaurant by the Sea (later The Ocean Shores Inn referred to locally as “The Inn”) along with and two carved seahorses.

Somewhere in the research material, Michelle and I hoped for some clue of local origin or mention of the clammy disappearance.

Certainly, the disappearance of something so large and unique should have garnered attention from local newspapers. And, while we find minor infractions like rowboats swiped from neighbors’ yards or live crabs unleashed in The Inn by a disgruntled salesman to the surprise of arriving dinner guests, sadly, not one printed word is found with mention of the town mascot.

It is a photo caption of the big brute in Woodwick’s book that offers the first hint in uncovering its whereabouts.

“The clam is the town’s mystery, as it disappeared, and speculation still exists as to its probable kidnappers or demise via a street crew,” she writes.

In her book, Margaret Rasmussen established the disappearance in 1971 with the clam landmark being “clam-napped by unknown ‘baddies.’ Rumor was that it is buried at the main sewer line.”

A lot of sewer work and water control news articles were written, especially after the community was granted official city status in 1970. However, no mention of clam foul play is found.

When searching through a historical record this far back, however, witnesses on record are a sparse commodity, then and now. They’ve moved out of the area or simply moved on.

The living folks who might have knowledge or an opinion of what happened, when queried, either knew nothing about the giant razor clam misfortune or just couldn’t remember.

But, over the course of many conversations and through the art of eavesdropping, a smattering of theories emerge. Among the most repeated and plausible endings for the giant clam are: buried, busted, burned, in somebody’s garage, and floated out to sea.

Like good mysteries, spy craft novels and political yarns there is usually an anonymous informant. And so there is here.

“I was there. I saw it,” said the talebearer. “It was buried in an intersection late at night after some partying. A backhoe dug a hole. It was deep and the clam was dumped in it and buried.”

The question is asked, “Which intersection?”

The silence is deafening.

So this Ocean Shores tale fades back into the dim past with questions remaining and conclusions averted. However, the act of investigation leads to the discovery of many other local unique events, baffling tales, secrets and mysteries challenging the curious to uncover, explore and maybe even solve. 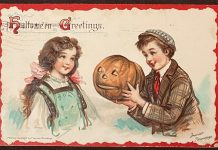 Halloween on the Harbor: A Turn-of-The-Century Halloween in Grays Harbor County 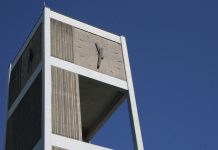