Among the impressive works of art displayed in the Alder Grove Gallery at the brand new Aberdeen Art Center at 200 West Market Street, two unusual pieces of fiber art by local artist Arlene Eubanks stand out. They are the works of an extraordinary weaver, but they are more than just weavings.

These works are sculptures, showcasing natural objects woven into basketry shapes with aesthetic rather than utilitarian purpose. One is a black baleen basket, the woven body emerging from large driftwood handle piece and accented with multi-colored stripes. The other piece is a black bamboo tipi shape sheltering a silver shell pendant.

Arlene, who created these works of art, is a fiber artist born in Lake Wilderness near Seattle. Arlene talks about a happy childhood growing up in nature. “I was always making things,” she remembers. Married to Aberdeen broadcaster Bob Eubanks, she raised five children before embarking professionally on her artistic career.

During the past twenty years, basketry trends have changed. The National Basket Organization, which holds its national conference in Tacoma, has been instrumental in revitalizing basketry. A number of fine artists and designers have studied weaving and transitioned from basketry to fiber sculpture. Arlene is very much part of this movement. As part of her training, she participated in Pacific Northwest Art School basketry classes on Whidbey Island.

From 1982 to 1984, Arlene studied at the Basketry School in Seattle acquiring the skills to create baskets and fiber sculptures that led to notable exhibitions. In 1989, twelve of her pieces were chosen for the Washington State Centennial Exhibition at the Ocean Shores Convention Center. She has exhibited in coastal galleries in Washington and Oregon and held exhibits as far away as Minneapolis. In 2014, she was honored with a Martha Stewart American Made nomination.

Arlene continued her artistic education studying design with Eric Sandgren at Grays Harbor College from 1999 to 2002. After her husband’s death in 2007, she enrolled in online classes in digital design at the Art Institute of Pittsburgh where she studied until 2009. In 2010, she opened her business, a fiber art studio named A Eubanks Basket.

Arlene loves the Pacific Northwest coast. During walks in nature, she gathers materials for her art such as lichen and interesting pieces of wood. In the past, the Eubanks owned a beach house where Arlene took beach walks and found what she calls ‘gorgeous things’.  She describes her work: “Art gives us a response to the natural world and an emotional connection. Rainforest lichens, weathered worm wood, or driftwood with rope and fishnet. Artists see beauty and virtue in the natural places that are promised to future generations.”

While Arlene loves the beach right here in Grays Harbor, she also loves to travel. While visiting faraway places, Arlene has found more inspiration for her art. On trips to Hawaii, she visited the Honolulu Museum of Art where she admired baskets woven from local vines. One very large basket in particular made her think, “I can do this.” Another source of inspiration were baskets made from natural materials at an exhibition at Glacier National Park. On a recent trip to Tanzania and Zimbabwe, Arlene was able to become acquainted with African weaving.

Her baskets are not utilitarian. She prefers the abstract in the shape of a basket. Often the idea of a basket is reversed. Instead of the basket containing an object, the basket is woven from or around the object. Arlene suspends weavings from objects that have beauty in themselves including driftwood, bamboo, antlers, rope, shells, dried flowers, African porcupine quills and even black whale baleen. Today, the trade of baleen has now been outlawed. However Arlene was fortunate when husband Bob Eubanks once managed to obtain a quantity from a bush pilot in Alaska before the sought after material became illegal.

In some pieces, the weaving is died in bold colors, contrasting with the muted natural tones of the object supporting it. The beauty of the finished pieces is the result of a creative struggle to balance the tension between objects and weaving. “This one cost me a lot of headache,” Arlene sighs describing the black driftwood basket with multicolored stripes on display at Alder Grove Gallery. “It was so hard to get the stripes right.”

The Aberdeen Art Center recently hosted a three-day basket weaving class taught by Arlene Eubanks. She is happy to be able to share her love for weaving with the community.

Look out for more classes in the future and visit the Alder Grove Gallery just south of the Aberdeen Post Office to enjoy the art of Arlene Eubanks and other accomplished local artists in the current Dia de Los Muertos exhibition. The show has been extended to the end of the year. 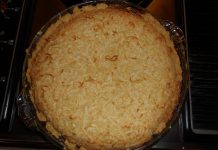 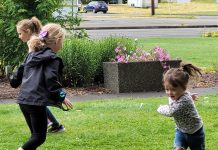