A fresh artistic perspective is emerging from the Quinault Nation. Ezekiel Serrano, a young painter and woodcarver is discovering the cultural art of his people, its meaning and its history.  His beautiful art work is a promising contribution to traditional Quinault art.

Ezekiel (Zeke) Serrano grew up in Hoquiam with three brothers and one sister. As a student in Hoquiam, he was introduced to Native American culture by the late Darlene Brueher who held the position of Indian Education Coordinator for the Hoquiam School District. A basket weaver herself, Brueher made it her task to teach urbanized Native American students about their traditions and history. Zeke fondly remembers gatherings and potlucks at Lincoln School and field trips his mother chaperoned. He also remembers participating in traditional Quinault dancing with his brothers and sisters.

Zeke studied art all through high school and college. He received an Associate of Arts degree from Spokane Falls Community College and graduated with a Bachelor’s in Science from Eastern Washington University. When he moved to Taholah to work at the Taholah Indian Health Clinic, he began to get closer acquainted with his tribal heritage.

Zeke is a Certified Group Trainer and finds great joy in keeping the elders of his tribe healthy. He teaches classes on food and traditional diet. At the same time, the elders are teaching him. “I got to know stories about the land, the environment and even about my own family,” he marvels.

After college, Zeke had been practicing art as a hobby.  Visiting the Quinault Cultural Center, he looked at the work displayed there thinking about why it was done and in what way it was significant for the community.  He began to paint and carve traditional Quinault art.

After Zeke won second prize at an art contest initiated by the Quinault’s No Oil-Shared Waters, Shared Values Campaign in July 2016, he was encouraged to become a professional artist. He is currently exhibiting at the Quinault Cultural Center and his work was displayed at the Hoquiam Timberland Library in January 2017.

The stunning patterns and semi abstract animal shapes of Quinault art are much more than ornamental. There are layers of meaning in each piece anchored in tribal legend, history and spirituality. The traditional shapes and characters form a language telling the story of an oral civilization living in a close mystical relationship with the land they live in, with its animals and with their creator.

While in contemporary, mainstream American art there is a focus on the artist expressing his or her individuality, Zeke Serrano’s works focus on the spiritual heritage of the Quinault community from which his individual voice is emerging.  He is also immersed in the natural environment of the North Beach, which he experiences close up on his daily runs on the beach.  “I see the changes of the seasons, I pass the same plants everyday and see them grow, I see the circle of life,” he says. “All this needs to be protected. We need to hold onto the things sacred to us.”

Zeke’s painting titled ‘Soar’ features the eagle – the creature of wisdom and knowledge whose body here also forms the salmon. The salmon is the Quinault people’s livelihood and their connection to nature. On the chest of the eagle, we see the circular symbol of the chief. In its talons, the eagle carries another circular symbol, the sun, the giver of life, who is the creator. The sun in its abundance of warmth radiates life and warmth, healing and renewal.

Zeke has carved a number of beautifully painted hunting paddles and ceremonial masks. A large thunderbird mask is one of his most impressive works. Thunderbird, a messenger of the creator, is a prestigious and renowned character in bright reds, white and black with showy cedar bark hair.

Zeke is currently working on a mask in Western Red Cedar, the ‘Keeper of Knowledge’. The Quinault are a spiritual people, a people of the river. The Keeper of Knowledge is a traveler between the visible world and the spirit world. Therefore Zeke carved him in the shape of the bow of a Quinault canoe. The Keeper is guided by the hands of the creator on each side of his face.  He is also guided by the eagle, the creature of wisdom, above his right eye, and the wolf, the protector, who is delicate and calm but at the same time a fierce leader, above his left eye. The blue color and an ocean wave design show the Keeper’s connection to the water.

“Carving is like a conversation. The finished product is part of me,” Zeke explains. This is why it is hard for him to put a price on his art. “These carvings used to be gifted,” he laments. He is eager to delve deeper into his cultural heritage. In the Quinault Cultural Center, he is reading a thick binder of legends collected by University of Washington anthropologist Ronald Olson in the early 20th century.

It means a lot to Zeke to keep Quinault culture alive. His art is an excellent contribution. 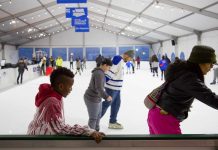