It takes a certain kind of person to land a Navy fighter jet on the deck of an aircraft carrier in the darkness. The execution must be perfect. When you are on a mission like this, knowing you have a hometown and a family who loves you, is a comfort. In this case, the town is Montesano and the pilot is Joel Bialkowsky.

Bialkowsky is a quiet and, maybe even bashful, young man. His parents, Paul and Lori Bialkowsky, learned their Naval aviator son was chosen to fly his F-18 Super Hornet over the Inaugural Parade on January 20, 2017. How could they keep a secret like that? The plan was to have military planes fly over Pennsylvania Avenue in an aerial parade. Unfortunately, the cloud ceiling was too low, so the planes stayed on the ground. That didn’t blunt the thrill of the opportunity, however.

Bialkowsky is known for his ability to stay on course. So when life throws you a curve ball, you still swing the bat.

Bialkowsky grew up watching the Blue Angels and attending air shows. A love of flying, it appears, runs deep in the family. When Joel was a teenager, his father, Paul, had his pilot license. Joel earned his private pilot license next. On his maiden flight, his brothers, Patrick and Evan, and his dad went along for the ride. His mom, Lori, stayed home.

Bialkowsky graduated from Montesano High School in 2005 and entered Central Washington University with the goal of earning a bachelor’s degree in aeronautical flight technology.  The degree prepared him with the skills necessary to achieve his dream of entering the commercial flying industry. Despite his hard work and determination, something got in his way. It was 2009 and the economy was in a free fall. Airlines were laying off pilots. They weren’t hiring.

“He just couldn’t let go of flying,” his father said. “He became a flight instructor while deciding what to do next.”

Bialkowsky thought back to the thrill of watching the Blue Angels. The clouds cleared and he knew what to do. He joined the United States Navy with the goal of flying the F18 Super Hornet. A longer, single seat plane, the F18 Super Hornet is capable of aerobatic maneuvers, air to air missile strikes and air to surface strikes. It also has a greater fuel capacity than other planes in its class. Once he earned his Gold Wings after three years of training, Bialkowsky was the one who circled the skies ready for orders.

“Joel deployed last year,” his dad said. “We didn’t worry too much. We did watch the news more carefully.”

“We knew he was well-trained,” his mom commented. “We were proud. We are proud,” she corrected herself with a laugh.

“He is careful, prepared, well-trained and cautious. If anyone can fly that plane, it is Joel,” Paul said. He and Lori smiled at each other.

Bialkowsky spent 7 months on the Dwight D. Eisenhower Aircraft Carrier. His wife Amy and young daughter remained in his duty station, Virginia Beach, Virginia. When the deployment was over, the immense carrier would arrive safely back at the Naval Station Oceana. Bialkowsky was part of Operation Inherent Resolve. The Eisenhower provided maritime security, conducted combat missions and launched air strikes during the operation.

In December 2016, Bialkowsky returned home an he and his family made their way to back to Montesano. More than a few people were happy to see him back in his hometown. Several weeks before his return, he did something special for his alma mater, Montesano High School. He was a surprise guest at the Veteran’s Day Assembly. He and Amy filmed a special interview where Bialkowsky spoke with conviction on the power of serving your country.

“Happy Veteran’s Day,” Bialkowsky said, appearing on the screen. His mother Lori, a Food and Consumer Science teacher at the high school, stared at her son.

“I am Lieutenant Joel Bialkowsky. I went into the military because I wanted to serve my country. I went into the Navy so I could land planes on an aircraft carrier,” he grinned. “The best part of the military is the camaraderie. I serve my country because it’s about something bigger than yourself. It’s about taking on immense responsibility few others can do. I know my mother is sitting in the audience. I couldn’t have gotten to where I am without her support. When you see her in the halls, tell her, ‘Go Navy!’”

He smiled and waved goodbye to the young students and the teachers who might have had him in class not that long ago.

Bialkowsky’s mom, Lori, may not have been sitting on her son’s first flight, but it is certain she has been alongside him in spirit on each one since then. 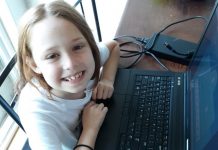 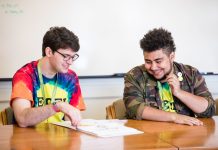