The Washington coastline is especially colorful when you make your way through Grayland. Driving south, you can see sparkling sandy beaches and ocean waves on your right and to the left, a sea of bright red berries reaching toward the green hillsides. It has been nicknamed the Cranberry Coast Highway for good reason with nearly 70 farmers tending cranberry bogs, most of which supply the Ocean Spray company. One of these farmers is Carl Waara, a fourth generation farmer. 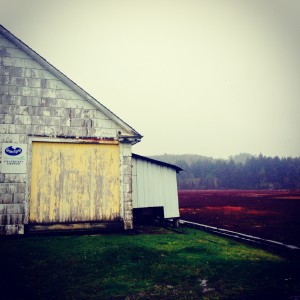 Carl lives in the home passed down to him from his father along with the perennial vine growing in the fields. Most of the time, he takes care of his 30 acres by himself which he enjoys because he is able to be outside and set his own hours. When he graduated from Ocosta High School and went away to college, he already knew he would return. When he met his wife while away at school, he told her right up front that she had to be content with moving back to Grayland to live on a cranberry farm.

Cranberries are not native to the Washington coast, rather settlers from the East Coast brought them along, finding the moist and highly acidic soil of the ancient Grayland swamp perfect conditions for cranberry growing. Early farmers also found new ways to pick berries. Instead of flooding the bogs, as you’ve likely seen on Ocean Spray commercials, the majority of farmers in this area use the Furford Picking Machine. This machine was invented and is still manufactured locally. It has not been improved upon in many years and many farmers even still use Furford Machines from the 1930s.

For the most part, the cranberries grown in Grayland are sent off to Ocean Spray to become products like cranberry juice and craisins you find in the supermarket. Despite the seemingly high numbers of cranberries produced in Grayland (10,000 pounds per acre), this constitutes just 1% of Ocean Spray’s overall production. Ocean Spray operates as a co-op, made up of 700 members who not only provide the cranberry production but also make company decisions.

Recently, Carl contributed to the Ocean Spray marketing campaign when he was asked to send a piece of his bog to Hollywood so they could set up an authentic cranberry bog on the street.

Cranberry growing is a big business. “Grayland was built on the cranberry bogs,” said Carl. Though most farmers work on their own, they hire pickers in the fall to harvest the cranberries by hand. The farmers are among many independent business owners in the area. “It’s a largely self-employed community,” said Carl, mentioning that nearly all people living in the area also worked independently in a variety of industries.

A small percentage of cranberries from each farmer’s land is also available to be sold in ways other than through Ocean Spray. For example, the Cranberry Road Winery got off the ground through farmers providing cranberries for their wines. The community members enjoy supporting each other and celebrating their love for cranberries including providing a museum to teach about the history of cranberry growing and a yearly harvest festival held in October.