Home 1. Winter Our Aberdeen’s Murals on the Map Instill Pride in the Community
FacebookTweet

Aberdeen is witnessing art growing on formerly ugly, bare walls. Murals are being created along the downtown corridor. A spectacular piece titled ‘Immigrants’ has just been completed by Hoquiam artist Jenny Fisher. Its bright colors are glowing in the July sunshine transforming the formerly naked western wall of the Union Gospel Mission.

The history of murals in Grays Harbor began in 1988 when the county received funds for 40 murals in honor of the State of Washington’s Centennial Celebration. The ‘History of Transportation’ mural at the downtown bus station is one of the five surviving Aberdeen paintings. Sadly our damp coastal climate destroyed five of the ten original centennial murals.

In 2012, the deteriorating ‘History of Transportation’ was restored by artist Jenny Fisher 25 years after she had created it. Another centennial piece, ‘Aberdeen, Washington, 1889-2014’, on the wall of the south side Swanson’s grocery store was restored by Gavin Miller in 2012-13. The original artist, Bob McCausland, had passed away.

The restoration of historical murals is happening thanks to the hard work and initiative of the people of Our Aberdeen, a nonprofit organization founded in 2009. Sylvia Dickerson chairs Murals on the Map, one of the committees of Our Aberdeen’s Art Promotion Group directed by local artist and board member Mery Swanson.

Sylvia believes public art is very important. “We want to enable people to do projects that create community pride and entice people passing through to stop and see what Aberdeen has to offer. We have a thriving art community to build on.” The particular goal of Murals on the Map is to “restore, document and create new murals throughout the downtown corridor.” They have accomplished much.

Existing murals are being promoted in a Murals on the Map envelope containing high quality photographs of Aberdeen murals. The back of each photo contains information on the artist, location, date and sponsors of the mural. These envelopes are available at public venues enabling visitors to conduct self-guided tours.

All Aberdeen murals are created by local artists. Dick and Lynn Creevan and the late Bob McCausland were among the pioneers who painted the centennial murals. Another pioneer, Jenny Fisher, a prolific artist whose interactive story telling murals engage the viewer continues to create new murals. After the completion of ‘Kelp Forest’ on the Aberdeen City Drug building and ‘Immigrants,’ she is scheduled to create another mural on the east side of the Colortyme building on East Wishkah Street.

Grays Harbor College art instructor Erik Sandgren has achieved renown throughout the Pacific Northwest. His glowing eight panel depiction of industry and nature in the Harbor was commissioned to celebrate the centennial of the Port of Grays Harbor. Receptionist and archivist Joseph Shay is always happy to show the murals in the conference room to visitors. Eric Sandgren also created ‘Lost And Found,’ a nine panel Northwest glyph mural gracing the atrium of the Aberdeen Timberland Library. Sandgren invited four of his students to collaborate on the mural ‘Nirvana and Aberdeen,’ a collage depicting “images associated with the band and its genesis within the context of Aberdeen’s history at that time.” The mural was featured in Sunset Magazine.

Aberdeen native Douglas Orr made his name as an artist in California. He returned to Aberdeen to create a large mural titled ‘Hands and History’ on the corner of Heron and K Street. Large hands of different races holding photographs from the Jones Collection put a new twist on the term photo realism. Orr has become very engaged in the development of the local art scene with the opening of the Aberdeen Arts Center at 200 West Market Street.

Murals are a wonderful way for artists to display their work. At the same time, they beautify empty walls and make art accessible to the general public instilling pride in citizens. Amazingly, even graffiti artists seem to respect fellow artists and keep their spray cans off murals. Recognizing youthful creativity seeking an outlet, Barb Shillinger is reaching out to Grays Harbor young people ages ten to twenty-one. Participants in the Young People’s Mural Project mail in a design which they will paint, on approval, on the walls of Art Alley south of the D & R Theater. The formerly dreary alley has already been lightened up by a few colorful youth murals. However, many empty spots are still awaiting young artists. Participation is free, paint is provided.

Murals for the community need community support. The needs are manifold. Artists need to be paid for their work. Walls with a coat of paint in good condition are needed. Large murals require scaffolding and lifts. “I do a lot of begging,” Sylvia says. “We receive a lot of in kind donations. Paint and equipment have been donated and business owners have donated their walls.”

Our Aberdeen has great plans for the future. Artists are invited to propose a project. On approval, Our Aberdeen will help with fundraising and publicity. A Native American mural to complement the ‘Immigrants’ is in the works. The artist and location are a secret. Sylvia doesn’t want to jinx the project.

Donations can be mailed to Our Aberdeen, P.O. Box 501, Aberdeen.

To participate in the Young People’s Mural project, call Barb Shillinger at 360-580-9039 or pick up a flyer at one of the Grays Harbor Timberland library branches. 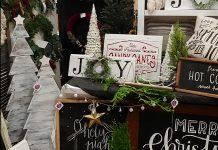 Kicking off the Festivities at the Country Christmas Bazaar